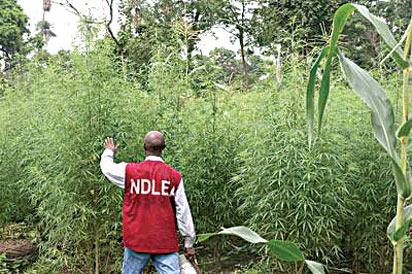 The Federal High Court, Benin, on Thursday sentenced an Indian hemp farmer and dealer, Mike Omoarukhe, to 75 years imprisonment, the NDLEA stated in Abuja on Friday.

NDLEA’s spokesman, Femi Babafemi, said in a statement that the drug dealer’s manager and three others working on his Indian hemp farms were also sentenced to 75 years imprisonment each.

They got an option of N700,000 fine each against which NDLEA Chairman, Buba Marwa directed the immediate filing of an appeal.

Mr Babafemi stated that the NDLEA arraigned the convicts in July on a five-count charge of cultivation of 22 hectares of Indian hemp and possession of 183.5 kilograms of the prohibited hard substance.

The court sentenced each of them to 15 years jail term on each of the five counts to run concurrently.

The operatives arrested six persons with 50kilograms of Indian hemp during the operation.

Mr Etok and Thompson were released, however, because they are minors.

He said that a follow-up operation in the forest on July 3, led to the arrest of one Emmanuel Ekpeyong and the destruction of three Indian hemp farms spreading across 22 hectares of land.

The NDLEA also seized 133.5kg of Indian hemp on that day, he added.

He said that after weeks of manhunt, the 36-year-old owner of the farm, Omoarukhe, was arrested at a relaxation joint at Irrua, also in Edo.