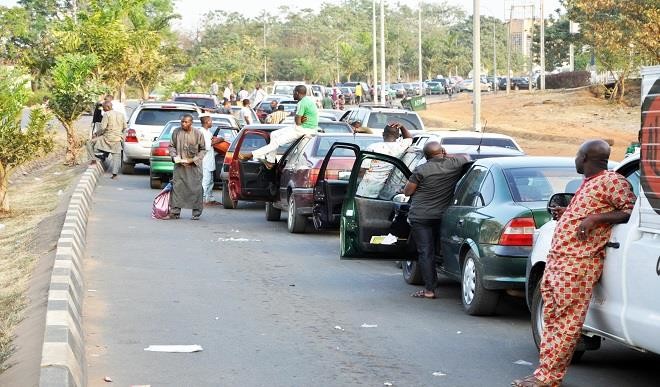 Segun Adeyemihttps://dailynigerian.com/
Jaafar Jaafar is a graduate of Mass Communication from Bayero University, Kano. He was a reporter at Daily Trust, an assistant editor at Premium Times and now the editor-in-chief of Daily Nigerian.
- Advertisement -

For over a week now, motorists have been subjected to long queues at filing stations across major cities in the country as a result of fuel scarcity.

In spite of efforts being made by the agencies of the government directly concerned with business of tackling the issue, the situation seems to be getting worse by the day.

Last week, a directive by the Federal Executive Council, FEC, was given to the Minister of State for Petroleum, Ibe Kachikwu, to bring an end to the fuel crisis across the country before the weekend.

NNPC spokesperson, Ndu Ughamadu, had expressed confidence that the long queues in most cities nationwide would “fizzle out in a matter of hours” last Thursday.

But industry players said the scarcity might not be unconnected with the ongoing turnaround maintenance embarked upon by the NNPC, a situation the corporations’ depots nationwide should have tackled.

An insider who preferred not to be named said, there is petrol in almost all the NNPC depots nationwide but officials only released the products after allegedly paying from N500, 000 to N600,000 per tanker as bribe.

“In a situation like this, the scarcity will linger because the fuel will be diverted to black marketers rather than filling stations.

“There is also connivance with the DPR officials who are bribed to look away when petrol is sold above the N145 cap.

The source further disclosed that in Kano for example, there is over 2,000 trucks of petroleum product at present but the NNPC refused to flood the market with it.

However, long queues in big cities of Abuja, Lagos, Kano and other places seem to be increasing than it used to be.

A survey conducted by DAILY NIGERIAN affirmed the foregoing as long queues of motorists were sighted struggling to buy petrol from two filling stations, Conoil and Total – ironically facing the Federal Ministry of Petroleum Resources and the NNPC.

Motorists said some petrol stations on the Abuja-Keffi road in Nasarawa State sell the product for as high as N200 per litre.

“Black marketers hawking fuel in jerry cans are now having a field day serving anxious motorists outside filling stations at about N200 and above per litre.

“Also, some filling stations too are not helping matters. Most of them only open their stations for few hours daily, mostly in the evenings, and the price too is almost the same with the black marketers,” a motorist lamented.