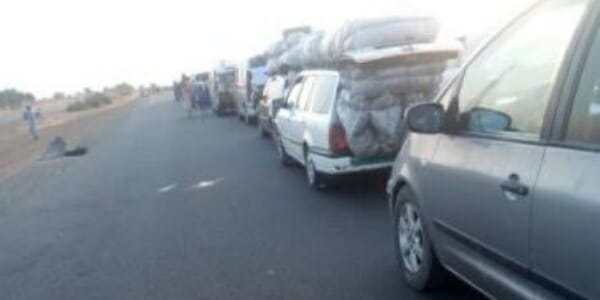 The terrorists from the Islamic State of the West African Province, ISWAP, have reportedly abducted five travellers along the Damaturu-Maiduguri Road on Tuesday.

PRNigeria gathered that the incident occurred at about 3 pm at  Tamsukau in Kaga LGA, which was about 7km away from Ngamdu, a Super Camp of the Nigerian Military.

The insurgents who dressed in military uniforms, set up a checkpoint which the commuters mistook to be soldiers.

A credible source told PRNigeria that the terrorists took away three passengers vehicles but later released the vehicles and some passengers, keeping five passengers with them.

The  source said: “The attack was suspected to be carried out by Abou Aseyia who was recently appointed as the Ameerul Fiya (Chief of Militant forces), in charge of Sambisa forest.”

The terrorists’ Commander who rode on 13 gun trucks, two MRAP and one Armoured Personnel Carrier (APC), had conducted many failed attacks in Ngamdu, Katarko in Yobe state and Damboa Local Government where several ISWAP fighters were killed by troops of Operations Hadin Kai.