Jose Mourinho: From walking out at Benfica to huge power struggles at Chelsea 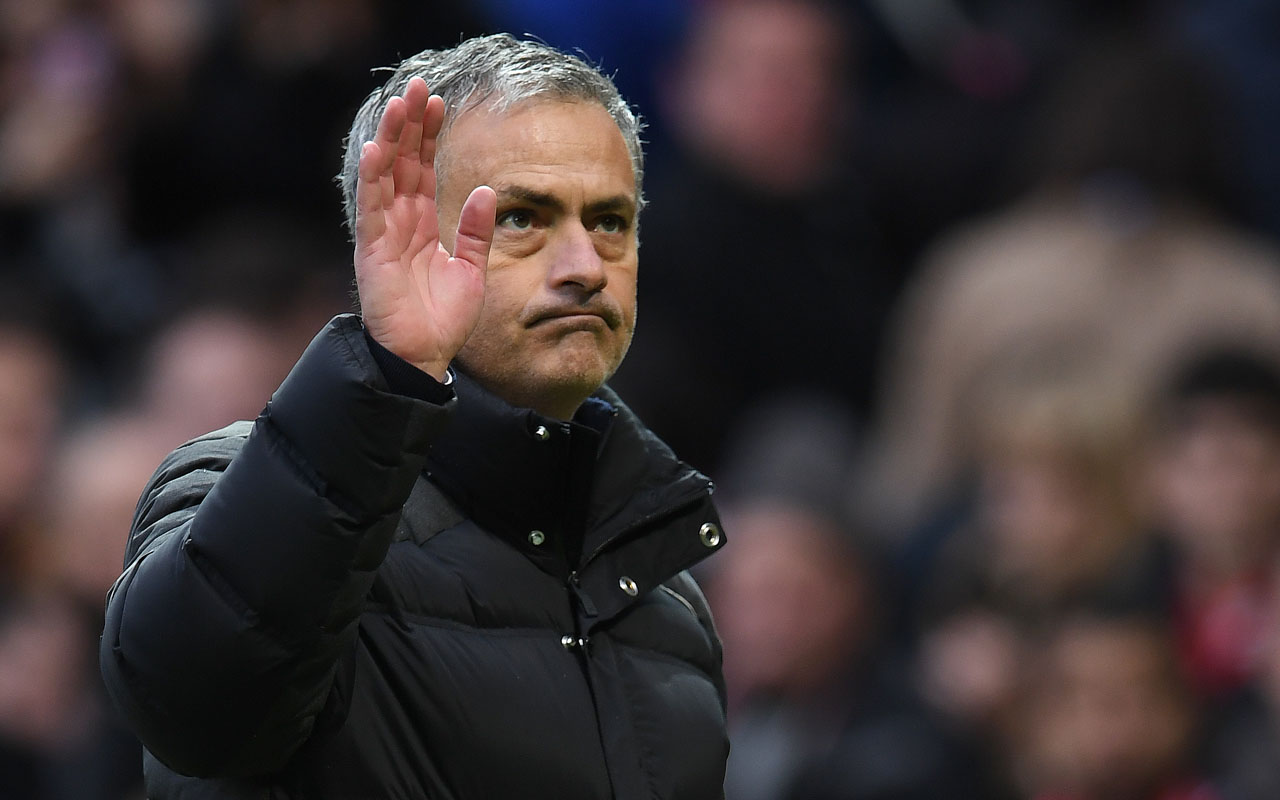 Jose Mourinho has vowed to see out the 18 months remaining on his Manchester United contract.Mourinho’s relationship with the Old Trafford board is understood to be under strain after he questioned the club’s spending when United slipped 15 points behind Premier League leaders Manchester City.Amid the uncertainty shrouding his future, Sportsmail takes a look at how his tenure came to an end at his former clubs.

Benfica
Following Mourinho’s unrivalled coaching education at Porto and Barcelona — under the tutelage of Sir Bobby Robson and latterly Louis van Gaal — his first head coaching job came at Benfica in 2000.He succeeded Jupp Heynckes at the beginning of the 2000-01 season and made an early statement of intent by thrashing bitter rivals Sporting Lisbon 3-0.

But his reign risked being cut short after Manuel Vilarinho was elected the new club president. Vilarinho was hellbent on instating former Benfica player Toni as head coach – a decision he later admitted that he regrets.Mourinho tested the water following the win over Sporting, fearing his job was at risk, and asked for a contract extension, which the club refused. The head coach resigned with immediate effect after just nine games in charge.

Uniao de Leiria
With Mourinho eager to get back in the game, Primeira Liga club Uniao de Leiria took a punt on the then 38-year-old.The Leiria club were not among the league’s big-hitters, such as Benfica or Portugal, and finished the previous season in 10th place.Mourinho took the club on an eight-match unbeaten run in the league, recording six wins and two draws, on his way to steering them to a fifth-place finish in the 2001-02 season.
His work at Uniao de Leiria was not to go unnoticed and the big dogs came calling soon after.

Porto
In January 2002, Uniao de Leiria were above Porto in the league and the Portuguese giants, sitting in fifth, moved to rectify that.They brought in Mourinho, who proceeded to guide the team to third before vowing to make them champions the year after. And he did just that.

The 2003-04 season he went one better, incredibly adding the Champions League to his trophy haul — eliminating the likes of Manchester United before beating Monaco 3-0 in the final — in a sensational double.He left the Estadio do Dragao a hero after his three-year stint.

Chelsea
Mourinho’s heroics at Porto earned him a lucrative deal from Roman Abramovich at Chelsea ahead of the 2004-05 campaign.He won the Blues’ first top-flight title in 50 years during in his maiden season in charge and made it two titles in a row in the 2005-06 season.All was coming up roses on the field for Mourinho, but behind the scenes it was beginning to look like a very different story.

A power struggle between him and sporting director Frank Arnesen came bubbling to the surface, while relations between him, Abramovich and the Russian’s advisor, Piet de Visser, were breaking down.The poor relationship heightened following the then club-record signing of Andriy Shevchenko from AC Milan for £30million.

Due to the peerless form of Didier Drogba that year, the Ukrainian was shunned to the sidelines. But Abramovich’s insistence on Mourinho playing the former Milan striker became a bone of contention throughout the season.Avram Grant was then appointed sporting director at Stamford Bridge, despite Mourinho’s objections, and was even handed a place on the club’s board.

A comparatively poor start to the 2007-08 season put paid to Mourinho’s ability to carry on and he promptly left just a month into the season – to be replaced by Grant.His unceremonious exit from Stamford Bridge marred his superhuman achievements there, leaving as the club’s most successful manager of all time and with a spotless home record.

Inter
The Portuguese took the reins at the San Siro at the start of the 2008-09 season after almost eight months out of work.He soon got back to winning ways — claiming the Serie A title by a 10-point margin — but the season was still viewed as a disappointment as Inter failed to improve on their Champions League performance when they were dumped out by Manchester United in the quarter-final.

Mourinho began his war with the Italian media that season, slamming Carlo Ancelotti, then of AC Milan, Juliano Spaletti at Roma and Claudio Ranieri of Juventus at various points throughout the campaign – claiming the former two had no hope of winning any titles.The following season Mourinho showed the first signs of hinting at another move away when he said he would ‘of course’ be interested in succeeding Sir Alex Ferguson when the Scot left his post at Old Trafford.

But that 2009-10 season was truly remarkable — the treble. Led by Samuel Eto’o up front and the guile of Wesley Sneijder and reinforced by Thiago Motta, Dejan Stankovic and Javier Zanetti in the heart of midfield, Mourinho etched his name into the history books at the San Siro.

The day after beating Bayern Munich 2-0 in the Champions League final, Mourinho claimed he was ‘sad, as almost for sure it’s my last game with Inter,’ adding: ‘If you don’t coach Real Madrid then you will always have a gap in your career.’He left the Italian giants, however, a hugely celebrated manager.

Real Madrid
Mourinho won all three domestic trophies at Real Madrid within his first two years courtesy of an embarrassment of both players and riches at his disposal.The 2012-13 season saw Los Blancos reach the semi-final of the Champions League. But after defeat by Jurgen Klopp’s Borussia Dortmund, the Portuguese hinted it would be his last year at the Bernabeu.Whereas his success had endeared him to fans at his previous clubs, such was the expectation at Real Madrid he felt he was ‘hated’ by some in Spain.

Tensions also grew within the club. He had a strained relationship with centre back Sergio Ramos and his decision to sideline veteran goalkeeper and fan favourite Iker Casillas in favour of Diego Lopez meant some fans turned.It essentially ended up dividing Real’s fanbase into ‘Mourinhistas’ and ‘Madridistas’

To boot, a fraught relationship between the manager and superstar striker Cristiano Ronaldo became public when the Mourinho criticised his compatriot, saying: ‘Maybe he thinks he knows everything and that the coach cannot improve him anymore.’The manager conceded the 2012-13 season had been the ‘worst of my career’ after suffering defeat by city rivals Atletico in the Copa del Rey final and failing to win any silverware.
He left the club under a dark cloud following the season, despite signing a four-year extension just 12 months prior.

The 54-year-old later said he had to beg the club to let him go as he ‘was not in love’ with his life in Spain‘To be honest, with the club [Real]’s structure, they wanted me to stay, they didn’t want me to leave,’ said Mourinho last summer.

‘Everybody in the club, president, CEO, the board, myself, we all felt after the years I was there that the difficult part of the job was done and they wanted me to stay.‘In fact, I almost had to beg to let them let me go.’

Chelsea
It was something of a homecoming when Mourinho returned to Stamford Bridge ahead of the 2013-14 campaign.After finishing third in his first season back at the Bridge, Mourinho romped to his third league title with Chelsea the following year. His third season began disastrously – his worst start to a managerial stint.

He had signed a four-year deal which was designed to keep him at the west London club until 2019 after the title-winning exploits the previous season but, once again, he would not see out his deal.

The Blues picked up just 11 points from their opening 12 league games and were dumped out of the League Cup on penalties by Stoke. Amid this terrible run, Mourinho was embroiled in a touchline row between him and then Chelsea club doctor Eva Carneiro which turned hugely unsavoury.
Mourinho was infuriated when Dr Carneiro and physio Jon Fearn went onto the field to treat Eden Hazard in stoppage time, with his team down to 10 men and hoping to eke out a 2-2 draw in August 2015.

Dr Carneiro was eventually sacked by the club and Chelsea were made to settle a multi-million-pound deal after she sued for constructive dismissal.In December — with the then champions sitting in a lowly 16th place in the league — Chelsea announced they would be parting company with Mourinho by mutual consent.

They hastened to add, however: ‘The club wishes to make clear Jose leaves us on good terms and will always remain a much-loved, respected and significant figure at Chelsea.’
Culled from Dailymail.co.uk