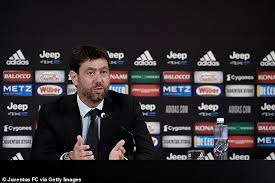 Juventus president Andrea Agnelli is refusing to give up hope on the European Super League, ESL, while insisting no player, not even Cristiano Ronaldo, is bigger than Juventus.

Juve were one of 12 prospective founding members to announce their intention to form the breakaway, closed-shop competition involving Europe’s elite.

The news of the potential breakaway caused anger across the continent, with all six English clubs involved subsequently pulling out alongside Atletico Madrid, AC and Inter Milan.

However, FC Barcelona, Real Madrid and Juventus stood firm on their commitment towards the radical changes in European football.

Agnelli once again addressed the matter on Friday prior to the Juventus shareholders’ meeting, held at the Allianz Stadium.

“The Super League, the consequences on ECA and UEFA, for the roles held for Real Madrid, FC Barcelona and today we are waiting for a ruling by the European Court of Justice,” Agnelli told reporters.

“The Super League was the admission from 12 clubs that football is refusing change to maintain a political class that does not risk, does not compete but wants to cash in only.

“I do not want to give up, and I did not do it yesterday, I will not do it tomorrow.

“The system needs a change and Juventus want to be part of it. But only through constructive dialogue, for everyone.”

Ronaldo, who joined the Bianconeri in 2018 before returning to Manchester United in September, was then praised by Agnelli.

This was in spite of the Juventus president insisting no player is bigger than his club.

“Having had the best player in the world, Cristiano, was an honour and a pleasure,” he added.

“The only regret is having had him for a year and a half without an audience at the Stadium. But it’s the Juventus shirt that requires responsibility, not team-mates or work-mates.

“Juventus are bigger than anyone who has had the honour of crossing their path from 1897 to today; we must remember the values of Juventus and Turin: work, sacrifice, and discipline, which is what inspires all those who work here.

“As Oriana Fallaci said, `you have to love, fight, suffer and win’. And this must inspire us: we must love Juventus, fight for it, be ready to suffer, and always have the objective to win.

“We have to work as a single body, knowing that the team and the group come first. We are all useful, no one is indispensable.”