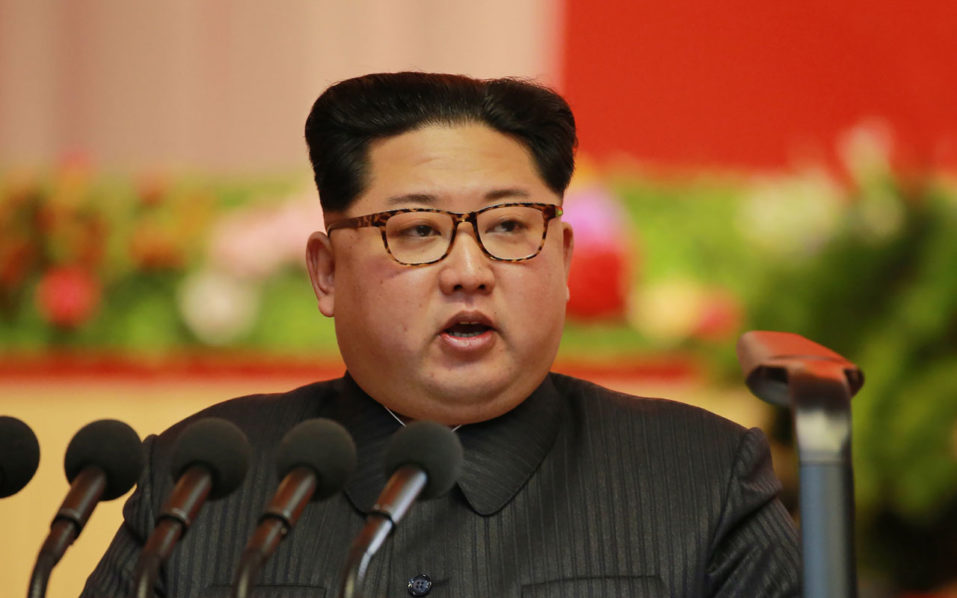 US President Donald Trump is not one to hold back when it comes to indulging in nuclear and diplomatic brinkmanship with North Korea’s leader whom he calls “Little Rocket Man.”

True to form, after Kim Jong-Un boasted that he could launch a devastating strike on the US mainland from his desk, Trump took to twitter.

With his trademark haphazard capitalization and punctuation, Trump demanded: “Will someone from his depleted and food starved regime please inform him that I too have a Nuclear Button, but it is a much bigger & more powerful one than his, and my Button works!”

But Kim’s New Year speech had not been limited to similar bluster. He also suggested Pyongyang send a Winter Games team to South Korea — and Seoul, in turn, reciprocated by suggesting high-level talks.

Trump’s earlier response to this idea was more cautious: “Perhaps that is good news, perhaps not — we will see!”

Perhaps he was more ambivalent about the talks plan because, on the face of it, the North’s 34-year-old dictator may be calling the bluff of an antagonist he has dismissed as the “mentally-deranged US dotard.”

Trump’s “maximum pressure campaign” was designed to plunge Pyongyang into such international isolation that it is forced to give up its nuclear program. Instead, Kim is making overtures to Washington’s ally South Korea.

Moon’s unification minister Cho Myoung-Gyon is now offering to hold “talks with the North at any time and place in any form” — perhaps as early as next week.

Washington has also suggested talks to end the stand-off, but only if Kim accepts he must give up his expanding nuclear arsenal before joining the international community.

If Moon’s opening marks a crack in allied solidarity, it will be a blow for this policy, and not one that US ambassador to the UN Nikki Haley would accept lightly.

“We won’t take any of the talks seriously if they don’t do something to ban all nuclear weapons in North Korea,” she told reporters at the United Nations on Tuesday.

“North Korea can talk with anyone they want, but the US is not going to recognize it or acknowledge it until they agree to ban the nuclear weapons that they have.”

Kim has shown no willingness to surrender his expensively assembled arsenal, especially now that it appears to include a missile theoretically capable of hitting US mainland cities.

Will Moon blink?
In his New Year address, the provocative autocrat instead vowed to “mass-produce nuclear warheads and ballistic missiles and to speed up their deployment.”

So will Moon seize the opportunity of talks on North Korea’s Olympics team to seek a way to live more safely on the doorstep of a new nuclear power?

“Kim Jong-Un may be trying to drive a wedge of some sort between the two nations — between our nation and the Republic of Korea,” she said.

“I can assure you that that will not happen. That will not occur. We are very skeptical of Kim Jong-Un’s sincerity in sitting down and having talks.”

Amid the uncertainty, risk specialists are nervous that a miscalculation by either side could lead to disaster.

Ian Bremmer, president of the Eurasia Group, warns that the period when the world could put off a decision on the North’s weapons has come to an end.

“The risk of miscalculation is high,” he warned.

Hell to pay
North Korea, he notes, has tested an intercontinental ballistic missile and now may feel more secure in terms of being able to deter a pre-emptive American strike.

“That’s a positive,” Bremmer argued. “It allows them to talk about reaching out to the South Koreans, the Chinese … you always want to negotiate from a stronger position.”

Bremmer, who has spoken recently to South Korean officials, said he sees a real chance Seoul may agree to freeze joint military exercises with the US to secure talks with Kim.

This would be a win for China and a rebuff for Washington, which refuses to accept any equivalence between the US military stance and Kim’s illegal nuclear program.

Trump may choose to play along with such a regional solution, or even seek credit for it. Or he may continue to insist that Kim backs down — boosting the chance of war.