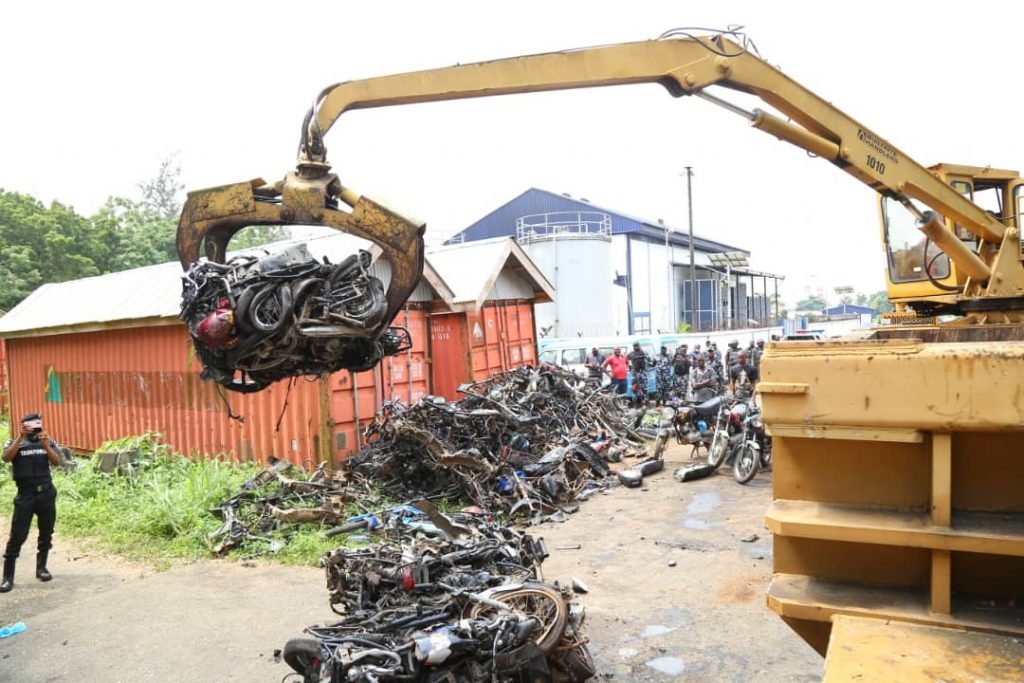 The Chairman, Lagos State Taskforce on Environment, CSP Shola Jejeloye, says the 482 motorcycles, seized and crushed by the taskforce is backed by law.

Mr Jejeloye told the News Agency of Nigeria on Tuesday, that the action was not hatred against commercial motorcyclists but enforcement of Lagos state traffic regulations.

Recall that the state on Tuesday, crushed 482 motorcycles impounded at different times and locations for contravening various traffic laws.

“I derive no joy in destroying the means of livelihood of people. The traffic law of Lagos state prohibits motorcycles from plying some roads.

“This includes driving against traffic and   on BRT lanes but the motorcyclists always disobeyed the traffic laws.

“We are to enforce the law. You cannot disobey the law and expect enforcement agents not to do their job.  If you break the law you face the consequences,” he said.

He said the taskforce was empowered by law with directives from the government and  must  be obeyed.

“Lagos state is not a banana republic. All rules and regulations of the state must be enforced.

“In some parts of the state, there are residents commending and celebrating our efforts against the lawlessness of commercial motorcyclists but some areas are joining the riders  to fight us for implementing government directives,” he said.

The chairman  stressed  that only those who obeyed the law could operate in the state.

He expressed worry over  the number of  young men in some parts of the state, unwilling to be meaningfully engaged, and had become security threat to the state.

He disclosed that such number of young people were found at Oniru-Maroko and Oriental Hotel, Lekki, Apapa area.

“The taskforce have placed undercover operatives around many areas to monitor such people,’’ the chairman said.

He, however, pointed out that majority of the officials had done well,  in spite of regular attacks on them during operations.

He also said there was a unit that monitored officials to ensure conformity with  the rules of engagement.

Mr Jejeloye added that anyone found to be unprofessional would be dealt with according to law.