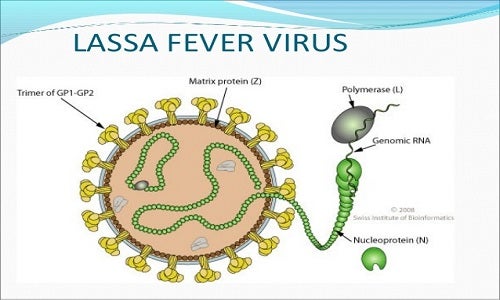 Maryam Hassanhttps://dailynigerian.com/author/rayyan/
Rayyan Alhassan is a graduate of Journalism and Mass Communication at Sikkim Manipal University, Ghana. He is the acting Managing Editor at the Daily Nigerian newspaper, a position he has held for the past 3 years. He can be reached via [email protected], or www.facebook.com/RayyanAlhassan, or @Rayyan88 on Twitter.
- Advertisement -

Dr Chikwe Ihekweazu, Director-General, NCDC, said this on Wednesday in Abuja, while giving the 11 weeks update on Lassa fever outbreak in the country.

The NCDC boss said in the update that four health workers, three in Bauchi and one in Gombe, were among the dead.

Mr Ihekweazu said the increase was as a result of reported new cases in 12 states which include Edo, Ondo, Ebonyi, Bauchi, Taraba, Plateau, Kogi, Delta, Enugu, FCT, Nasarawa and Gombe.

READ ALSO:   Until we wipe out COVID-19, no one is safe – Lai Mohammed

The director-general said 123 local government areas across 27 states had been affected so far.

“Ondo and Edo are the worst hit states with 15 and 11 confirmed cases respectively, while 78 patients are currently being managed.

According to him, of all confirmed cases, 73 per cent is from three states, Edo, with 33 per cent Ondo with 32 per cent and Ebonyi with seven per cent.

He said that the center had continued to scale up its preparedness and response for Lassa fever outbreak across the country.

“We have continued to train health workers from the major treatment centres. Risk communications had increased and logistics had also improved to ensure continuous supply of medical and laboratory commodity.

“National Rapid Response Teams have been deployed from NCDC to support response activities in nine states.

Mr Ihekweazu said, “the five molecular laboratories for Lassa fever testing in the NCDC network are working full capacity to ensure that all samples are tested and results provided within the shortest turnaround time”.

He said NCDC was working to support every state in Nigeria to identify one treatment centre, while supporting existing ones with care, treatment and IPC commodities.”

Mr Ihekweazu said that NCDC had also provided infection prevention control guidance for all health workers in the country, calling on all involved to make use of it.

He reiterated that NCDC would continue to support affected states through deployment of inter-disciplinary Rapid Response Teams and provision of medical supplies including Rivabrin for treatment of Lassa fever patients.

The NCDC boss called on Nigerians to continue to keep their environments clean and store food in tight containers to avoid contact with rats.

Lassa fever is an animal-borne, or zoonotic, acute viral illness that is spread to humans through food or household items contaminated with rodent urine or feces.

The illness was discovered in 1969 and is named after the town in Nigeria where the first cases occurred.