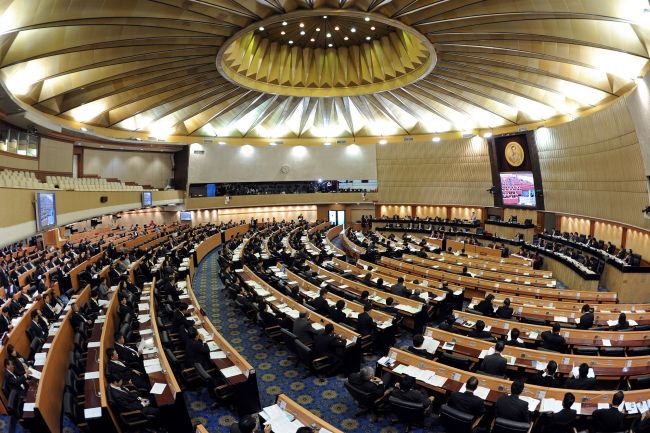 Thailand’s legislature on Wednesday shot down a draft bill aimed at strengthening democracy by overhauling key institutions they claimed had been hijacked by the military elite.

A joint session of the lower house of parliament and the Senate voted 473-206 to reject the bill, with six abstentions.

It therefore called for a constitution passed under a military junta in 2017 to be changed to ensure a clear separation of powers.

The draft was backed by 130,000 petitioners and sought to abolish the 250-seat, junta-appointed Senate, and restructure the Constitutional Court and key state agencies.

Thailand’s government is still led by the architects of a 2014 coup, who remained in power after a 2019 election that its rivals say was stacked in the military’s favour.

Prime Minister Prayuth Chan-ocha, the coup leader, has denied that.

The government’s critics, including a formidable student-led protest movement that emerged last year, say democracy has been subverted by the military and its royalists allies, who wield influence over independent institutions.

“The 2017 constitution protects and enables General Prayuth to extend his power by providing mechanisms of control through the Senate and independent agencies,” one of the bill’s proponents, Parit Wacharasindhu, told legislators.

Since 2019, 21 bills have been proposed to parliament seeking constitutional amendments, only one of which has passed, which sought changes to the balloting system.

Pro-government lawmakers defended the constitution, reiterating that it was endorsed in a referendum and that the coup was necessary to address a political crisis.

Lawmaker Wanchai Sornsiri said during the debate that  “to only fix the problem of coup and its consequences without addressing the political problems that came before that, will that lead to a perfect democracy?”.

Thailand has seen 20 constitutions and 13 coups since the end of absolute monarchy in 1932.