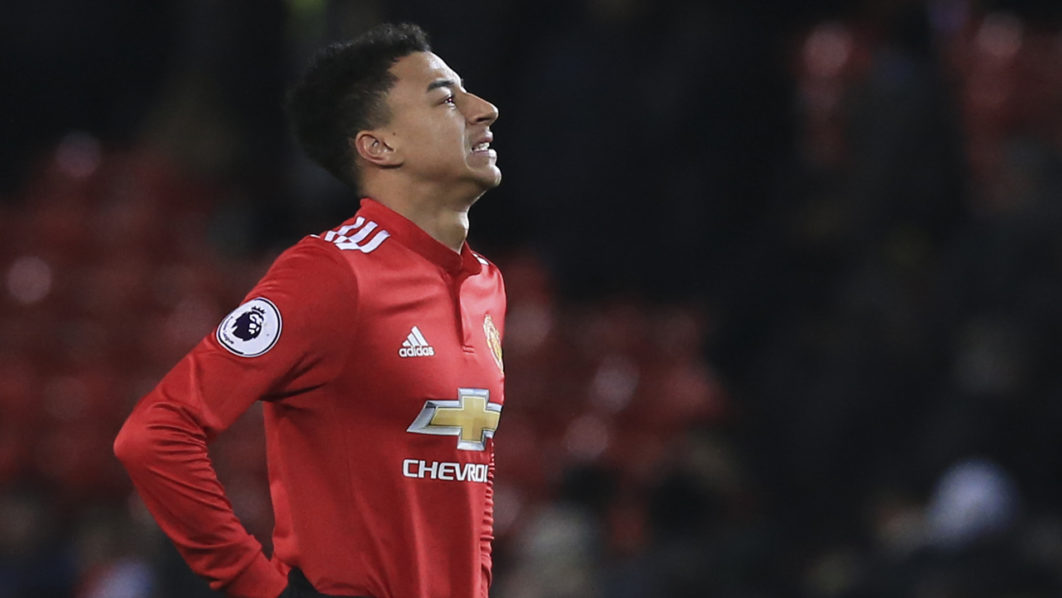 Jose Mourinho’s troubles mounted as Manchester United needed a 91st-minute equaliser from substitute Jesse Lingard to rescue a point in a thrilling 2-2 draw with Burnley on Tuesday.

First-half goals from Ashley Barnes and Steven Defour had put Burnley on course for their first victory at Old Trafford in over 55 years.

But, after pulling United back into contention with his first goal on 53 minutes, Lingard struck a dramatic equaliser in the first of five added minutes.

A Juan Mata free-kick was only cleared to the edge of the area by Ben Mee and Ashley Young’s shot took a kind defection, into the path of Lingard who converted clinically through a crowded area.

Second-placed United are now 12 points behind runaway leaders Manchester City, who can extend their advantage at Newcastle on Wednesday.

Burnley took barely two minutes to take the lead, from a free-kick conceded by Marcos Rojo, who was booked for his trouble, after he brought down Jeff Hendrick as he sprinted down the left.

Icelandic international Johann Berg Gudmundson took the set-piece which badly exposed United’s current defensive frailties as the ball struck Romelu Lukaku in the chest and, with his teammates slow to respond, it was left for Barnes to poke the ball in from close range.

Worse would follow after 36 minutes when Ashley Young tripped Scott Arfield, 25 yards out and dead centre in front of the United goal, presenting Defour with the perfect opportunity to send a magnificent right-foot free-kick soaring into the top left-hand corner.

After Mourinho had been enraged by his team conceding a late equaliser at Leicester at the weekend, the United manager must have been equally angered by the first half effort here.

Lingard reduced arrears with a sublime finish, back-heeling Young’s right-wing cross past his marker Kevin Long and into the corner of the Burnley net to set up the grandstand finale.

But there was no disguising the setback this draw handed Mourinho, with a handful of supporters booing the team off at the interval.

Instant dividends
Even before doubling their lead, Burnley might have had a second when Arfield’s first-time volley clipped the bar on its way over the home goal.

United handed a first start since early April to Zlatan Ibrahimovic, back from his knee ligament injury, and he partnered Lukaku up front.

But it was not until the midpoint of the first half that United put the visitors under any pressure when Paul Pogba’s goal-bound header was turned away, one-handed, by Nick Pope.

United responded more quickly, after going down to a second goal, and within seconds defender Ben Mee was required to clear a Marcus Rashford effort of the Burnley line.

Mourinho responded with a double substitution at the break, bringing on Lingard and Henrikh Mkhitaryan for Ibrahimovic and Rojo, and the move almost paid instant dividends.

Young’s 50th-minute cross was met by Lingard who somehow struck his shot against Pope from inside the six-yard area then saw the ricochet loop up, hit the bar and fly to safety.

Lingard only had to wait three minutes to make amends, however, with his superbly-taken goal giving United fresh hope.

That led to a long procession of United attacks as they desperately looked for an equaliser although Lukaku hardly covered himself with glory as he mistimed his jump and failed to connect with Marcus Rashford’s inviting cross soon after.

Pogba came close with a 70th-minute free-kick that just cleared the bar but, for all their pressure, United lacked the guile to find a way past the well-drilled Burnley defence until Lingard’s injury-time heroics.