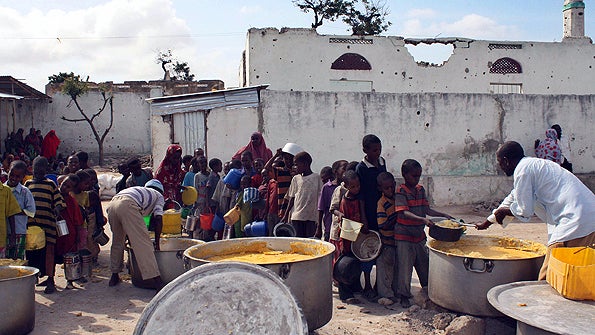 Muslim Rights Concern, MURIC, has urged the federal, state and local governments to create feeding centers to cushion the effect of COVID-19 lockdown in the country.

MURIC Director, Prof. Ishaq Akintola, made the appeal in a statement in Lagos on Wednesday.

“Though the extension is our best option if we don’t want to see Nigerians dropping dead on the streets, the federal, state and local governments must change their method of distributing palliatives.

“The idea of sharing raw foodstuff is not working. This method is being abused by corrupt officials. Much of the foodstuff is being diverted. It is not reaching the poor masses.

“The three tiers of government must device means of making diversion of palliatives unwise, cumbersome, unprofitable and unnecessary.

“This can be achieved by organising central feeding points in all communities at the local, state and federal levels,” he said.

He advised that foodstuffs being distributed could be opened up, cooked and served in take-away packages for distribution among Nigerians.

“It will be unthinkable for corrupt officials to divert up to a quarter of cooked food without making a mess of their own houses, stores and offices.

“They will have no option than to distribute the take-away packages as arranged.

“We are constrained to cry out to the three tiers of government. Nigerians are hungry. Families are starving. Most of the raw foodstuff meant for poor Nigerians did not reach them,” he said.

He said hunger had produced its natural backlash in form of the astronomical rise in criminal activities in Abuja and Lagos.

“Young gangsters are attacking neighbourhoods in daytime. Gunshots now rent the air at night in places that have been peaceful for years.

“Parents cannot control the youths because they cannot feed them. The new audacity of gangsters in Lagos is an indication that the palliatives are not being delivered to the targeted recipients. Lagosians are hungry,” he said.

He advised employers of labour to pay their workers very early this April particularly in places like Lagos and Ogun states.

READ ALSO:   Oduduwa Republic: What will be the fate of Yoruba Muslims, MURIC asks Igboho, others

“This will enable millions of working parents to feed their families. The young ones will stop raiding their neighbours’ houses once there is food at home,” he said.