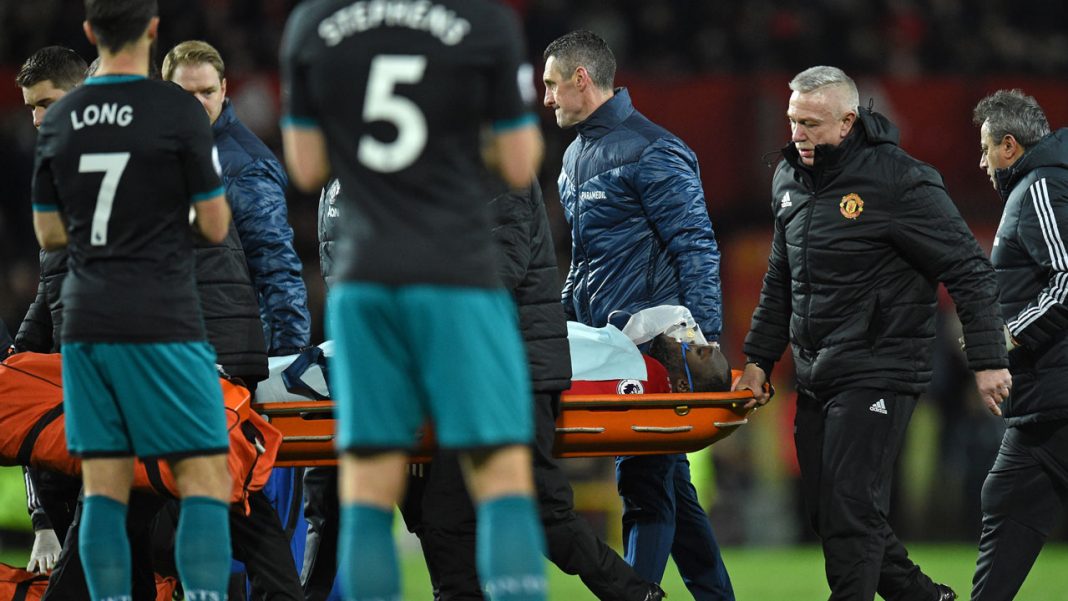 Manchester United’s Belgian striker Romelu Lukaku is taken off on a stretcher after appearing to pick up a head injury during the English Premier League football match between Manchester United and Southampton at Old Trafford in Manchester, north west England, on December 30, 2017.Oli SCARFF / AFP

Paul Pogba had a late effort ruled out for offside and a third successive league draw over the holiday period has effectively ended United’s hopes of competing with league leaders Manchester City for the title in the new year.

City could extend their advantage over United — who are third to 17 points if they beat Crystal Palace on Sunday.

Adding to his concerns, Mourinho now faces an anxious wait to discover the extent of his star striker’s injury.

Lukaku, whom Mourinho had admitted in the build-up to the game is desperately in need of a rest, lasted just eight minutes before being stretchered off.

His injury came from an innocuous challenge with Wesley Hoedt, but one in which the Southampton defender clashed heads with the United man, striking the back of his skull.

The Belgian striker needed a full five minutes of on-field treatment before being carried off the field and replaced by Marcus Rashford, although his afternoon had already started in disappointing fashion.

Lukaku was on the end of a perfect Juan Mata cross after three minutes but could only head his effort over from six yards.

Sofiane Boufal pulled the ball back from the by-line and James Ward-Prowse’s firm shot was well saved, at full stretch, by David de Gea. Hoedt then mis-timed his header from a Ward-Prowse corner, glancing across goal from six yards out when it looked easier to head on target.

Southampton had dropped out-of-form goalkeeper Fraser Forster, handing Alex McCarthy his debut for the club, and he proved solid cover as United ended the half in slightly stronger form.

A Mata strike was well saved by McCarthy’s leg before Rashford almost made contact with an excellent Ashley Young cross and Southampton skipper Maya Yoshida escaped a strong penalty appeal after he appeared to handle in blocking Jesse Lingard.

The situation might have become even more dire for United early in the second half when the excellent Ward-Prowse crossed from the right and Shane Long darted into the area ahead of Nemanja Matic, only to be denied by a magnificent De Gea save via his right boot.

There were audible groans from the Old Trafford crowd after a mis-hit cross by Henrikh Mkhitaryan sailed over the Southampton goal just after the hour.

However, those groans turned to cheers a few moments later with the sight of Anthony Martial warming up, and he replaced the Armenian just after the hour mark.

Martial injected some much-needed pace, and confidence, into the United attack but De Gea’s goal was the one still under the greater threat, a point underlined when Dusan Tadic headed over a Boufal cross from a promising position after 71 minutes.

However, United could have won it in the 81st minute. The ball seemed to be going in after a scramble in the box following Ashley Young’s free-kick, but an offside Paul Pogba touched it in anyway and the offside flag came up, summing up the hosts’ frustration.