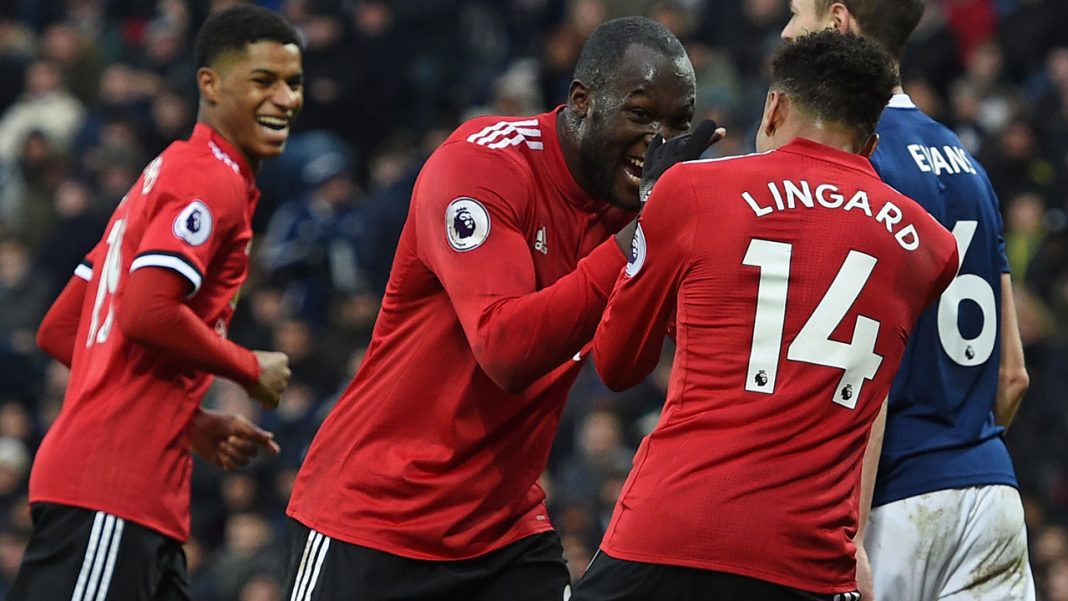 Lukaku put United ahead at the Hawthorns and Lingard netted with the aid of a deflection to double the visitors’ lead before half-time. But what looked destined to be a comfortable win became tense when Gareth Barry prodded home a second-half goal for the hosts.

And United ended the game defending for their lives before claiming the win that kept them 11 points behind neighbours Manchester City in the Premier League title race.

United made a dominant start with West Brom guilty of squandering cheap possession on a frequent basis.

Yet it was the hosts who threatened first in the ninth minute courtesy of a clever backheel from Salomon Rondon to release James McClean on the left.

He crossed towards the far post for Oliver Burke, but the winger could not control a difficult ball on his full Premier League debut.

United’s first sight of goal came on 14 minutes when Ashley Young angled a dangerous cross from the left towards Romelu Lukaku at the far post.

Baggies defender Kieran Gibbs made an important header and Lukaku was penalised for handball as he tried to keep the move alive.

West Brom enjoyed a handy spell of possession midway through the opening half as United lost their way following a decent start.

The home side forced two corners on the left but both were poorly directed by Grzegorz Krychowiak.

But United opened the scoring on 28 minutes as Lukaku returned to haunt his former club.

Burke lost the ball cheaply on the Albion right, Marcus Rashford was given too much space and his cross was glanced home by Lukaku, who had ghosted between Jonny Evans and Gibbs.

There was a glimmer of hope for Albion on 34 minutes when Allan Nyom crossed towards Rondon at the near post but he was denied by Chris Smalling’s interception.

But a minute later it was 2-0 to United as Lingard struck.

Heated
He was set up on the edge of the area by Juan Mata after good work by Lukaku, and Lingard’s low shot struck the leg of defender Ahmed Hegazi and looped past helpless goalkeeper Ben Foster.

West Brom already looked beaten but just before half-time Jake Livermore did at least draw a save from goalkeeper David de Gea with a low shot that the keeper held well.

There was a heated start to the second half when Rashford went down holding his face after a collision with Hegazi.

Replays showed there had been little contact but the United player was booked after leaping up and confronting Hegazi head to head.

But that clash did not provide the spark for a fiery second half as United sat back on their lead and Albion were unable to pose any consistent threat.

They had a rare chance when Rondon forced De Gea into a routine save with 17 minutes remaining before substitute Chris Brunt fired over the crossbar from the edge of the area.

But with 13 minutes to go Albion did grab the goal that gave them hope.

Brunt delivered a corner from the left, United failed to clear and Barry profited from an ugly scramble to poke home the club’s first goal under Alan Pardew and his first for Albion.

Things might have got worse for United in the closing stages but Brunt’s superb left-wing cross was headed wide of the near post by fellow substitute Jay Rodriguez.