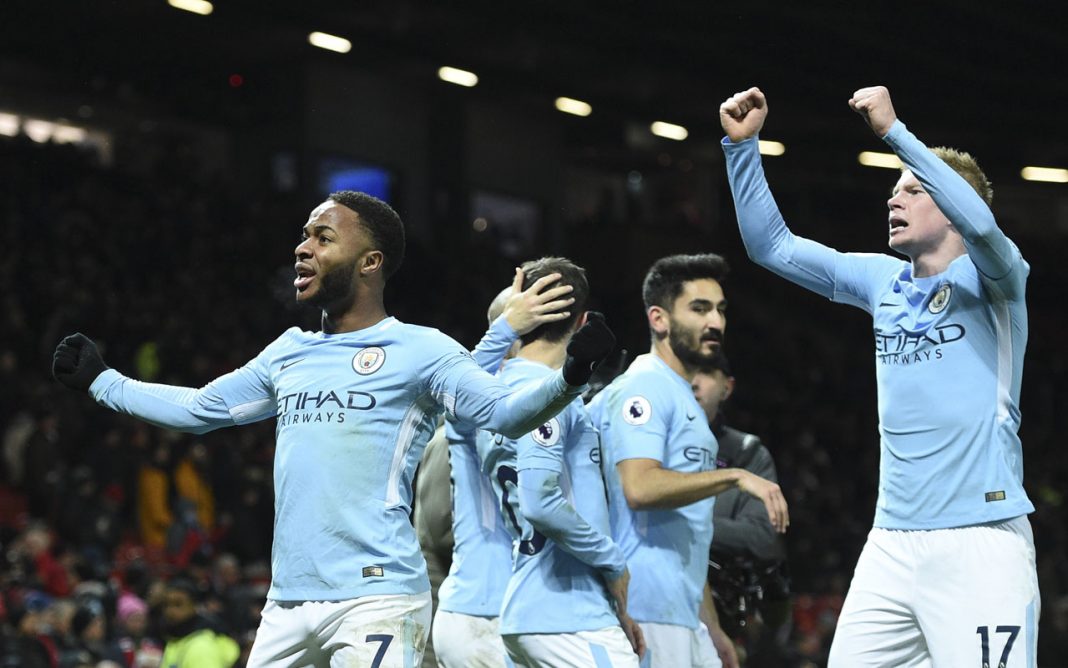 The victory was extra sweet for Manchester City as they not only won at the home of their rivals, they were able to deny Manchester United the opportunity to set their own record as the Red devils would have set a new club record of forty-one consecutive home games without a loss, if they had been able to avoid defeat. Tonight, Pep Guardiola and his team will have the opportunity to extend that record tonight and out rightly own the record of consecutive wins in the Premiership, whether in a single season or not.

Three games were played last night, Crystal Palace moved off the bottom of the log with a 2-1 home win over Watford, while Burnley rose up to fourth place with a 1-nil win over Stoke city at Turf Moor and Chelsea defeated Huddersfield 3-1 at the John Smith’s stadium to go level on points with second placed Manchester United, who will be playing tonight. Seven Premier League games will be played tonight and I’ll be previewing a few of them.

SWANSEA vs. MANCHESTER CITY
Manchester City currently have an eleven point cushion over their nearest rivals on the log and can afford to take it down a notch at Wales tonight when they take on Swansea at the Liberty Stadium. Pep Guardiola must have really taken last season’s trophy-less campaign very hard as he has fashioned out a record setting team this time around, which seems to be marching relentlessly towards the title. This City team will be looking for their fifteenth consecutive win in the league and the most impressive part of this run is the fact that they have beaten four of the five sides that are supposed to pose a serious challenge to their title ambitions.

This will be a top against bottom clash when they kick off and City are expected to return to the Etihad with all three points, but as we all know football is not mathematics and there’s always the possibility of an upset in every game. This current Swansea team had picked up just one point from their last seven matches in the league before last weekend’s 1-0 victory over West Brom. Former City striker Wilfred Bony seems to have found a bit of form with the Swans as he has scored in each of the last two games he has played for the club and will be the player that Swansea will be looking up to in this match. Federico Fernández is back from injury for the hosts and was named on the bench at the weekend, so Paul Clement might hand a start to the defender tonight. For Manchester City, Vincent Kompany came off at the interval in Sunday’s Manchester derby and looks set for another spell on the sidelines. Last weekend’s win would have boosted Swansea and they might just be able to capitalize if City underrate them in tonight’s game.

MANCHESTER UNITED vs. BOURNEMOUTH
The Red Devils will be thankful to have a fixture so soon after their dismal performance in the Manchester derby to try and get back to winning ways. Their long unbeaten run at home was ended by their neighbouurs and the journey to creating another unbeaten run begins tonight against Bournemouth. This fixture last season was a nightmare for Manchester United as they were held to a 1-1 draw by a Bournemouth team that had a man sent off just before half time and United also contrived to miss a penalty in that game. Before last weekend’s loss to Manchester City, the Red Devils had won all their home games in the league and they will be expecting to return to winning ways against the Cherries tonight. Romelu Lukaku seems to be seriously low on confidence and getting a couple of goals tonight should be able to boost his morale.

Bournemouth are only three points above the drop zone after a series of four games without a win in the league, although they have drawn three of those games and will definitely set up to frustrate United and try to leave Old Trafford with a point. Only six teams have a better defensive record than the Cherries and their defense would have to be in top form to successfully get something from this game. Marcos Rojo might not feature here, so Phil Jones, who returned to the bench at the weekend, and Victor Lindelof will battle for Rojo’s starting spot if he can’t feature. Paul Pogba serves the second of his three-game ban tonight, while Marouane Fellaini is still a doubt. Henrikh Mkhitaryan might have a chance of getting back into the team given the quick turnaround between matches, while Zlatan Ibrahimovic might also get his first start since April after being eased back into first-team action. For Bournemouth, Adam Smith returns from suspension and will likely slot back into the team at right-back.

WEST HAM vs. ARSENAL
The Hammers ended a run of eight league games without a win in a very emphatic way with a 1-0 victory over Chelsea at the London stadium last weekend. That victory will have given them the needed confidence going into another London derby as they face Arsenal at home tonight. It was David Moyes’ first win as the club’s manager and it kept them off the bottom of the league, however, they are still in the thick of the relegation battle as they are just one point above bottom placed Swansea and a point off safety, so they really do need a result against the Gunners tonight. They have the second worst defense in the league and that is the department where Moyes has begun to work on and it seems to have started paying dividends as they were able to keep a clean sheet against Chelsea.

Another clean sheet tonight will definitely be on the priority list of the Hammers. Arsenal were lucky to leave St Mary’s with a point last weekend and will need to put up a better display if they intend to leave the London Stadium with all three points tonight. They have been very prolific in this fixture recently, scoring three goals in each of last three meetings with the Hammers. Andy Carroll and Javier Hernandez are back from injuries and will be pushing for starts, but Moyes may stick with the same XI that stunned Chelsea. Aaron Ramsey is set for a spell on the sidelines after suffering an injury over the weekend, which could finally pave the way for Jack Wilshere to start a Premier League game. This will be a very interesting game to follow and could swing either ways, but I’ll be leaning slightly towards the Gunners.

NEWCASTLE vs. EVERTON
The Magpies are sliding down the table at an alarming rate and they will be hoping to arrest their current slump when they host Everton at St James’ Park tonight. They have lost seven of their last eight league matches and the pressure on Rafael Benitez is increasing by the week. They have conceded fifteen goals in their last five matches and that is a huge problem that Benitez has to address and quickly. Five managers have already lost their jobs in the EPL this season and unless Newcastle starts winning, Benitez might just become the sixth before the end of the year.

Everton are one of the teams that got rid of their manager earlier on in the season, replacing Ronald Koeman with Sam Allardyce, and it seems to have had a positive effect on the team as they have moved up to tenth after hovering around the relegation zone for a while. They are currently on a three game unbeaten run and have actually just lost once in their last six games in the league. Their defensive line has been rock-solid lately under Big Sam as they have conceded just once in their last three matches. A win for Everton tonight will almost certainly seal the fate of Benitez and the Spaniard will be very wary of that and want to deliver a positive result at home to the Newcastle faithful.

In the three remaining fixtures taking place tonight Tottenham will want to build on their first win in five games, which they secured over the weekend, with another victory against Brighton, while Leicester will be looking for their fourth win on the bounce when they visit Southampton and Liverpool will want to get back into the top four with a victory over West Brom at Anfield.