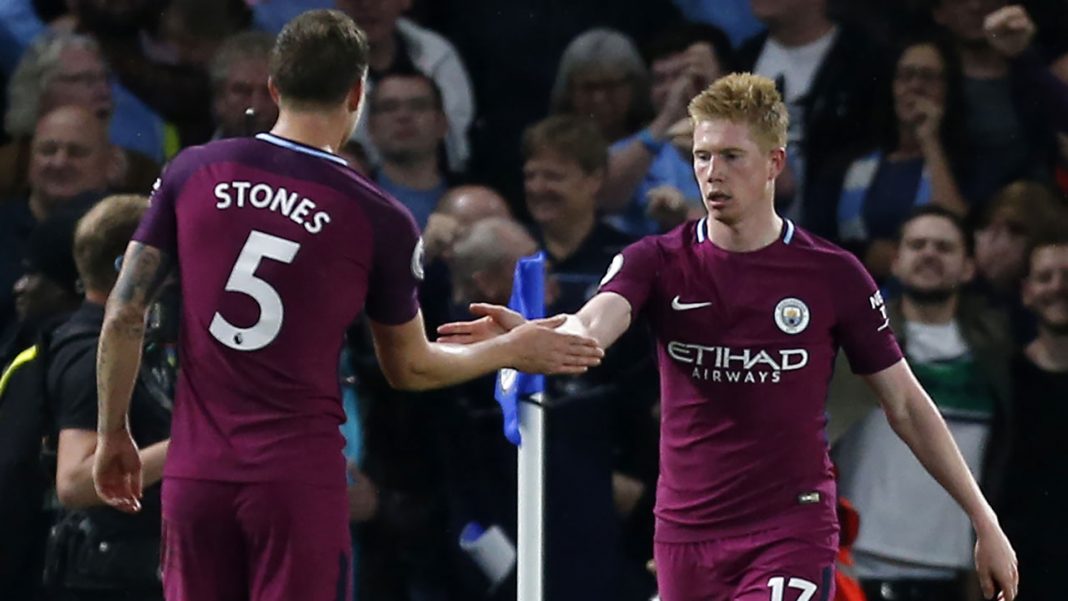 Manchester City look unstoppable in their relentless surge towards the Premier League title, and only have lowly Swansea standing in the way of Pep Guardiola’s men setting a new record of consecutive wins on Wednesday.

City are 11 points clear at the top of the Premier League and the managers of Manchester United and Chelsea both effectively conceded defeat in the title race at the weekend.

Their victory against Jose Mourinho’s United on Sunday was their 14th straight win in the Premier League — a single season record that also equalled the best-ever run Arsenal established over two seasons in 2002.

Yet despite their frightening form, City defender Kyle Walker is urging caution.

“We have to keep our feet on the floor and keep working hard, preparing physically and mentally,” he said.

“We have another important one on Wednesday against Swansea. We have to keep getting three points.”

Guardiola has declared repeatedly that his team will lose a league match at some point this season but few people would expect that to happen at second-from-bottom Swansea.

David Silva is in dazzling form, with goals in each of his past two appearances and a man-of-the-match display on Sunday but the Premier League’s leading scorers have an array of talent supporting him.

However there could be consequences on and off the field following derby victory. Captain Vincent Kompany was substituted after an hour with what appeared to be the latest in a sequence of muscle injuries.

With John Stones out until early January with a hamstring injury, it means Guardiola has just two fit senior centre-backs — Nicolas Otamendi and Eliaquim Mangala.

And the Football Association has demanded answers from both United and City following reports of an ugly fracas in the Old Trafford tunnel after the match that reportedly left City assistant coach Mikel Arteta bloodied.

Guardiola must decide whether to recall striker Sergio Aguero, who was an unused substitute on Sunday, after Gabriel Jesus played in a front three against United alongside Raheem Sterling and Leroy Sane.

Swansea striker Wilfried Bony may feel he has a point to prove against his former club.

Bony had a disappointing year-and-a-half in a City shirt, scoring just 10 goals in 46 appearances after joining them from Swansea in January 2015.

An uninspiring season on loan at Stoke failed to rebuild his reputation and the Ivory Coast forward is now back at the Liberty Stadium for a second spell.

After failing to score in his first eight games back at Swansea, Bony has now found the net in each of his past two. He struck on Saturday as they beat West Brom 1-0, climbing off the bottom of the Premier League and easing some of the pressure on manager Paul Clement.

“We have to go into our next game with no fear,” said winger Nathan Dyer.

“Manchester City are doing very well so we will have to ensure we are concentrating for the full game and then take the chances we create.”