1 of 10
Paris Saint-Germain’s Brazilian striker Neymar (R) celebrates with teammates after scoring the opening goal of the UEFA Champions League Group B football match between Celtic and Paris Saint-Germain (PSG) at Celtic Park in Glasgow, on September 12, 2017.
FRANCK FIFE / AFP 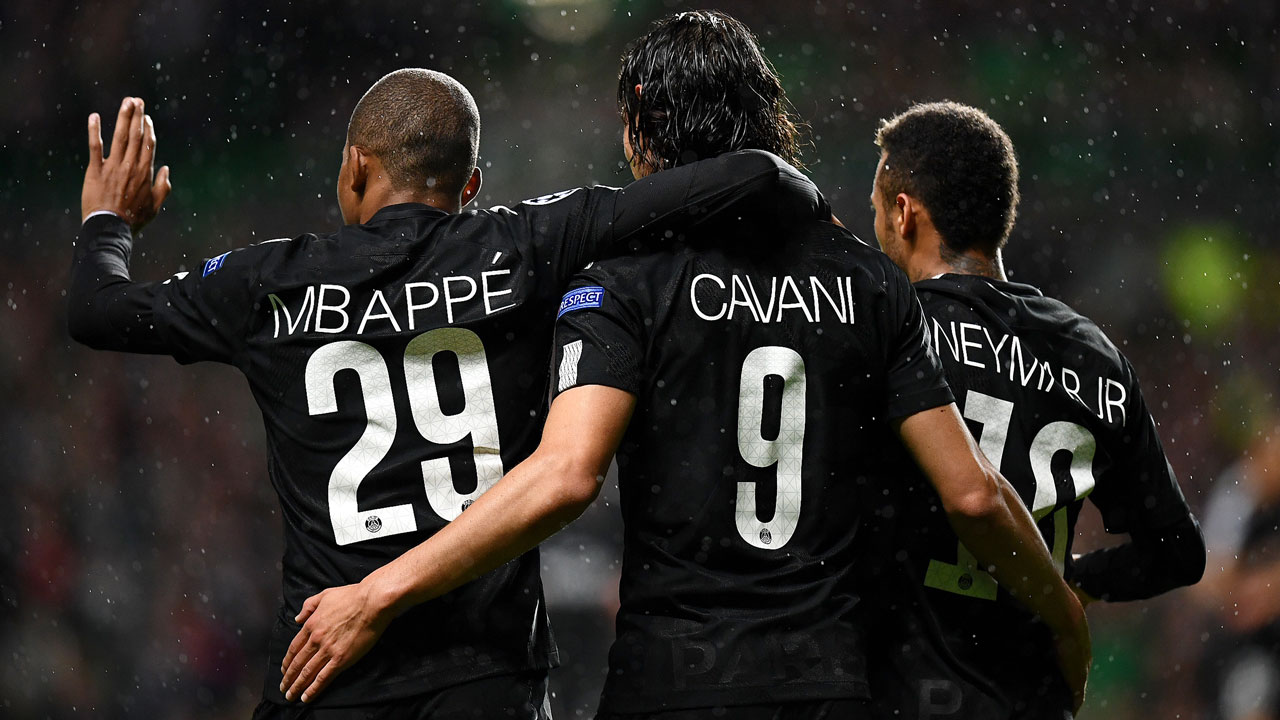 Neymar, Kylian Mbappe and Edinson Cavani all scored as Paris Saint-Germain began their Champions League campaign with a 5-0 thrashing of Celtic in Glasgow on Tuesday.

Brazilian Neymar continued to pay back his 222 million-euro ($264 million) world record transfer fee with his fifth goal in five games to put PSG in front before he set up Mbappe to make it 2-0.

Edinson Cavani then converted from the penalty spot five minutes before the break and things got worse for Celtic in the second half.

Mikael Lustig’s 83rd-minute own goal and Cavani’s angled header two minutes later heaped more misery on the Scottish champions, who could yet find themselves in trouble with UEFA after a fan managed to make his way onto the pitch to aim a kick at Mbappe during the first half.

“The most difficult thing here is to cope with the rhythm and intensity they play with and, of course, with the support they have,” PSG coach Unai Emery said.

“I think my team showed a lot of character. It was a real team effort and they showed a real controlled approach to the match, which I am really pleased with.”

The emphatic win propels PSG to the top of Group B on goal difference from Bayern Munich, who beat Anderlecht 3-0 and who the French side host in a fortnight.

The nature of the victory was also a real statement of intent from this summer’s big spenders who are determined to make a bigger impression than ever before on Europe’s elite club competition.

Following last season’s collapse to Barcelona in the last 16 — a tie in which Neymar starred for the Catalan giants — this European campaign was always going to be about a test of PSG’s mettle rather than their flair.

However, the French side’s superstars — and in particular their front three, christened the ‘MCN’ in France — showed no signs of fear inside the intimidating atmosphere of Celtic Park as the gulf in class between the sides showed from the start.

Celtic felt they should have had a free-kick in the PSG half after Scott Sinclair went down but the visitors took full advantage as Adrian Rabiot’s quickly-played ball behind Anthony Ralston found the Brazilian who expertly lifted a shot over Craig Gordon.

Moment of madness
Emery had identified Leigh Griffiths as the danger man for Celtic before the game and the striker came close to an equaliser when his curling free-kick was tipped over by Alphonse Areola.

Mbappe then showed why PSG are prepared to make him the world’s second-most expensive player when he grabbed his second goal in two games since joining on a season-long loan from Monaco.

Neymar’s headed ball across goal was missed by Cavani but the 18-year-old, who PSG have an option to buy for a fee that could reach 180 million euros, pounced to fire home.

A moment of madness from Celtic allowed the French side to add to their advantage before the break as Jozo Simunovic needlessly pulled back Cavani in the box.

The Uruguayan took the spot-kick himself and sent Gordon the wrong way. Celtic improved after the break as PSG took their foot off the gas but two late goals left the Scottish giants with their biggest ever home loss in Europe.

Lustig scored an own goal after substitute Julian Draxler drilled the ball across goal before Cavani rose at the back post to send a sublime angled header past Gordon from Layvin Kurzawa’s cross.

“Defensively we were just too far off them and secondly I was disappointed in how we retained the ball. We didn’t keep the ball for long enough,” Celtic manager Brendan Rodgers said.

“If you do that against what is arguably the best team in the world just now they will punish you.”