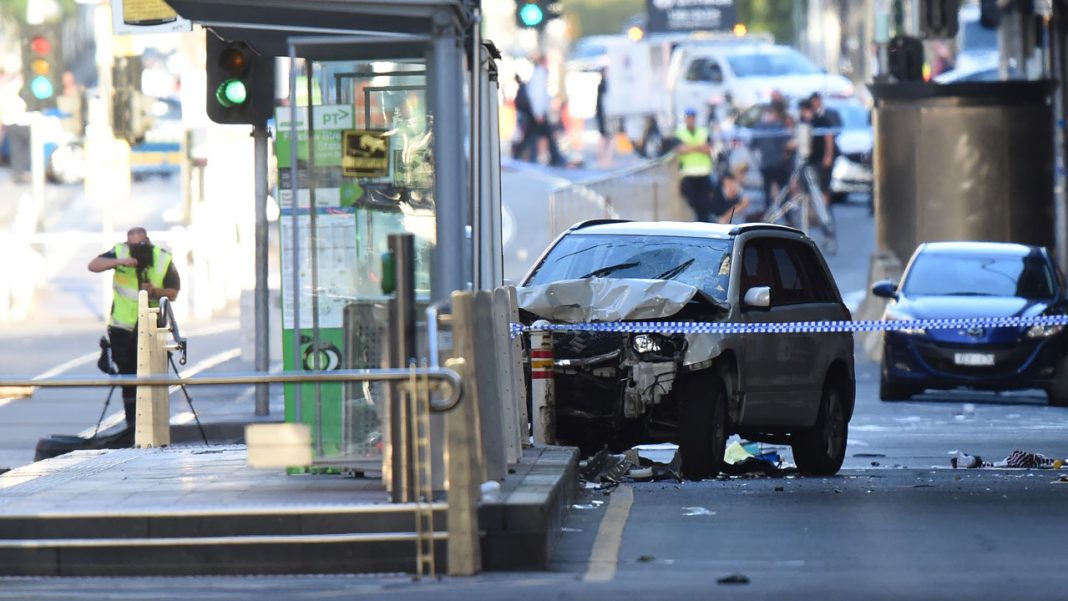 A white SUV (C) sits in the middle of the road as police and emergency personnel work at the scene of where a car ran over pedestrians in Flinders Street in Melbourne on December 21, 2017. The car ploughed into a crowd in Australia’s second-largest city on December 21 in what police said was a “deliberate act” that left more than a dozen people injured, some of them seriously.Mal Fairclough / AFP

An Afghan refugee accused of ploughing his car into pedestrians in Melbourne was charged with 18 counts of attempted murder Saturday, as police vowed a boosted presence over the Christmas period.

Saeed Noori, who has a history of drug abuse and mental problems, allegedly drove his car through a busy downtown intersection on Thursday, careering into tourists and shoppers.

His motive is not clear, although police allege he made “utterances” to them about voices, dreams and the “poor treatment of Muslims” after his arrest.
No link to any terrorist group has been found.

“A 32-year-old man has been charged with 18 counts of attempted murder and one count of conduct endangering life,” Victoria state police said in a statement, citing Thursday’s attack.

Broadcaster ABC said Noori did not apply for bail when he appeared in court on Saturday, putting his head in his hands and becoming emotional when he saw his mother weeping during the short hearing.

The magistrate ordered a psychiatric assessment and he is due to appear in court again on Wednesday, the broadcaster reported.

Of 19 people taken to hospital after the incident, 12 remain, with three in a critical condition.

Nine foreigners were hurt, including three South Koreans, two of whom are fighting for their lives. The others were from China, Italy, India, Venezuela, Ireland, and New Zealand.

With a major carols by candlelight event scheduled for Christmas Eve and the Boxing Day cricket Test between Australia and England taking place nearby, police said they will be out in force.

“Police are very well placed to do everything that is necessary to keep venues like the MCG (Melbourne Cricket Ground) safe and so many others that are going to be really busy over these coming days,” Victoria state Premier Daniel Andrews said.

Thursday’s incident came after a car rammed into pedestrians in Melbourne’s busiest mall in January, killing six people. The driver, whose case is still being heard, was a drug addict who had allegedly just stabbed his brother.

Like other countries, Australia has been taking steps to prevent vehicle attacks in crowded public places since the Nice truck incident in southern France last year that killed 86 people.

They include deterrent options like fencing and closed circuit cameras, and using delaying tactics such as trees and bollards to slow down vehicles.

Melbourne has also been installing a public siren system to warn people of possible terrorist attacks or other serious threats.