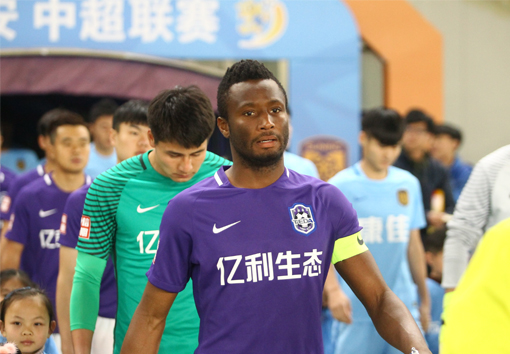 Nigeria and Middlesbrough midfielder Mikel Obi on Wednesday expressed his disappointment over Middlesbrough’s inability to convert their several goalscoring chances.

The News Agency of Nigeria (NAN) reports that Middlesbrough struggled in front of goal as they failed to beat Bristol City in Tuesday’s Championship clash at the Riverside Stadium.

This was in spite of creating a lot of goalscoring chances.

Middlesbrough’s hopes of securing a playoff ticket consequently suffered a huge setback following a 0-1 loss to the visitors.

Mikel was quoted as saying on the club’s website that Middlesborough would have been out of sight with the first half chances that came their way.

He had added that it was a familiar story in the club.

The 31-year-old signed for Middlesbrough in January on a deal until the end of the season after leaving Chinese side Tianjin Teda as a free agent in December 2018.

“For the last three games, I don’t understand how some of our chances didn’t go in. It’s unbelievable. Sometimes football is very cruel like that.

“We come out to try and put in a good performance and make sure we don’t disappoint the fans.

“We keep getting these chances. The lads are doing everything possible so that we take the lead when we’re on top, get one or two and then we can settle, but it’s just not coming.

“We all sat there in the changing room scratching our heads after the game wondering how on earth we didn’t get a goal. How did we not come away with something? How does one of those not go in?

“We have done everything but score. We’ve hit the woodwork, had shots blocked on the line, hit the last defender… whatever we do they are just not going in for us right now.

NAN also reports that Middlesbrough are currently in the eighth position with 58 points from 39 games on the English Championship’s 24-club log.