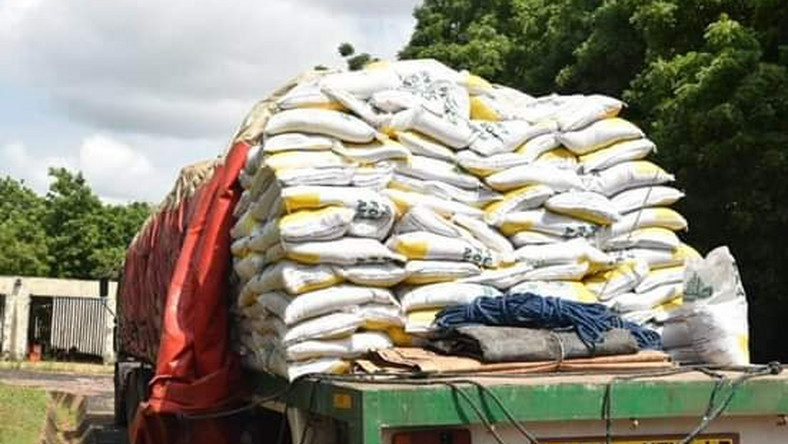 The Coordinator, Defence Media Operations, John Enenche, disclosed this while briefing newsmen on the activities of the Armed Forces between Jan. 7, 2021 and Jan. 13, 2021 on Thursday in Abuja.

Mr Enenche said the impounded fertilisers were intercepted in a large-wooden boat suspected to have been smuggled from Cameroon with two suspects on board.

He said that the suspects and items were currently in the custody of the Operation Delta Safe and would  be handed over to the appropriate prosecuting authorities  for further action.

Mr Enenche stated that the Office of the National Security Adviser, ONSA, had a policy on the use of fertilisers in the country due to criminal usage of the product other than agriculture.

He said that the policy had prohibited individuals from bringing in fertilisers and selling them  to individuals.

“Equally, while fertilisers are majorly for agricultural purposes, the possibility of their being acquired by criminal gangs, terrorists and militants for sinister purposes cannot be disregarded.

“This is why fertilizers have remained a potential component for the fabrication of explosives owing to its content of ammonium nitrate.

“Furthermore, the fertilizers impounded can  pose a security threat considering the current security challenges in the country,” he said.

The Coordinator said that the  troops also arrested a medium-size wooden boat laden with 17 drums of 300 litres of PMS with two suspects while on routine patrol around MBO River on Monday.

He also disclosed that the NN Ship DELTA in conjunction with FOB ESCRAVOS had, on Jan. 11, discovered a large-wooden boat laden with no less than 215,000 litres of stolen crude oil along Jones Creek, Warri South West Local Government Area of Delta.

According to him, these arrests affirm the Armed Forces of Nigeria’s commitment toward eradicating sundry crimes in the country.

“The High Command reassures the general public of its untiring commitment toward securing the country.

“Members of the general public are enjoined to continue providing timely information on the activities of criminals in their various localities to the military and other security agencies for prompt and effective action,” he said.

The Police Command in Akwa Ibom said its officers killed four suspected pirates who specialised in terrorising fishermen in Ibeno waterways in the state. The...
Read more
News

The ongoing strike by the Amalgamated Union of Foodstuff and Cattle Dealers of Nigeria has caused a rise in the prices of animals in Lagos and other Southwestern states.
Read more