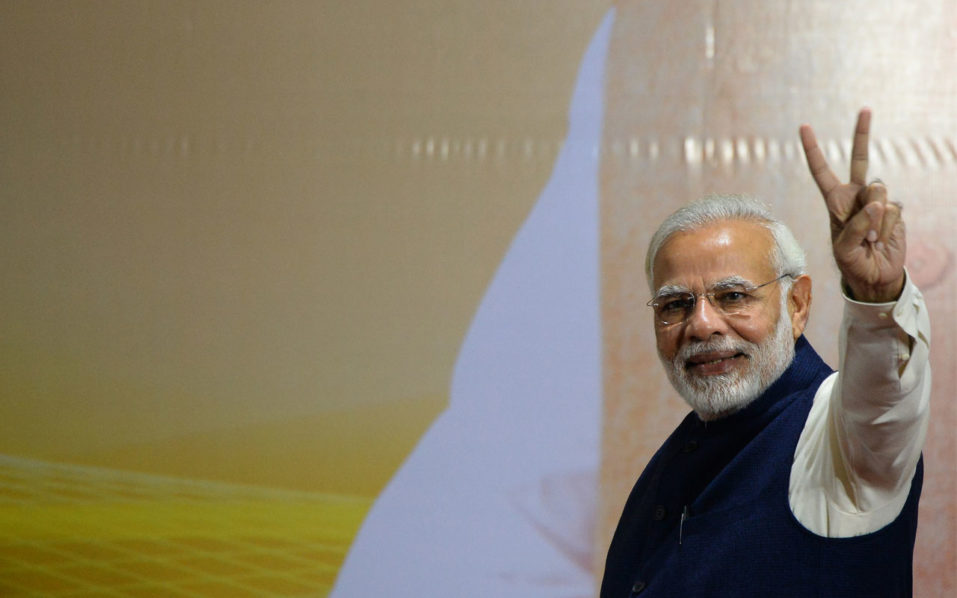 Indian Prime Minister and head of the Bharatiya Janata Party (BJP) Narendra Modi gestures at the start of a speech at the party headquarters in New Delhi on December 18, 2017. Indian Prime Minister Narendra Modi declared victory December 18 in two state elections, including a closely-fought race in his stronghold of Gujarat where the charismatic leader fronted the campaign. Modi thanked voters in Gujarat, his home state in India’s west, and the northern Himalayan region of Himachal Pradesh, for backing the ruling Hindu national party in the local polls. / AFP PHOTO / SAJJAD HUSSAIN

Indian Prime Minister Narendra Modi Monday declared victory for his party in two state elections, including a closely-fought race in his stronghold of Gujarat where the charismatic leader fronted the campaign.

Modi thanked voters in Gujarat, his home state of around 60 million in India’s west, and in the northern Himalayan region of Himachal Pradesh, for backing the ruling Hindu national party in the polls.

“I bow to the people of Gujarat and Himachal Pradesh for their affection and trust in BJP,” Modi posted on his Twitter account, using the initials of his Bharatiya Janata Party.

“I assure them that we will leave no stone unturned in furthering the development journey of these states and serve the people tirelessly.”

His rival Rahul Gandhi, who just two days ago replaced his mother Sonia at the helm of the main opposition Congress party, conceded defeat in Gujarat and congratulated the BJP on its win.

The ruling party was also poised to wrest control of Himachal Pradesh from Congress, extending BJP control to 19 of India’s 29 states and further bolstering Modi before a general election in 2019.

Congress, which has ruled India for much of its history but was thumped by Modi’s BJP in the 2014 national poll, now holds just four states in the world’s largest democracy of 1.25 billion people.

Party chief Amit Shah credited Modi’s development agenda for prevailing over “family politics” — a thinly-veiled reference to Rahul and the Nehru-Gandhi dynasty that has led Congress for generations.

As counting continued the election commission said the BJP was on track to win 99 seats in the 182-seat Gujarat parliament as of early evening.

That result would return the BJP to power for a sixth consecutive term in the state but would slash the number of seats from 115 in the last election.

Some experts had forecast a backlash against Modi over unpopular economic reforms that hit businesses hard, including a controversial ban on higher-value banknotes and the introduction of a national goods and services tax.

“The (BJP) have certainly lost a lot of ground (in Gujarat), but Congress should have actually won this election, given the anger in the state against the BJP,” political commentator Manisha Priyam told AFP.

“This was expected… It is a tremendous victory and Modi has come out as the single most popular leader,” party supporter Sandeep Kapoor told AFP.

India’s Sensex plunged in opening trade Monday but recovered throughout the day as results turned in favour of the BJP.