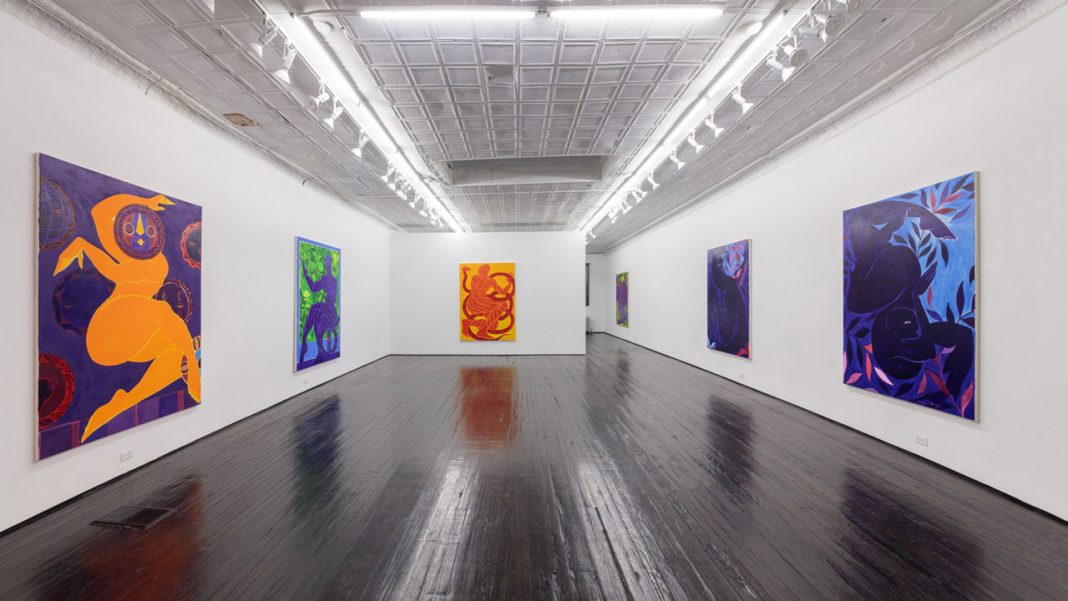 Adeniyi-Jones draws from specific historical objects to create his own mythologies and imagined representations of ancient royalty as well as deities of the Yoruba, called orisha. The striated figures in ‘The Prince’s Red Serpent,’ ‘The Prince’s Decoration,’ and ‘Blue Sovereigns’ cite the bronze head sculptures that were first crafted in the ancient Yoruba city Ile Ife and memorialized royal figures. The artist extends the heads’ scarification lines across the full lengths of his figures’ bodies. Similarly, ‘The Prince’s Decoration’ includes a royal Asante Stool from the Ashanti empire and ‘The Magus’ incorporates West African performance masks.

While some paintings incorporate particular objects, Adeniyi-Jones’s characters and settings are often androgynous, abstracted, and historically vague. “Red Twins” and both paintings titled “Blue Dancer” feature performative and alluring bodies suspended in deep fields of color. The figures’ acrobatic, floating poses imbue them with supernatural properties so that they begin to take on the qualities of the orisha of Yoruba mythology.

Born in Nigeria and raised in London, Adeniyi-Jones is also influenced by the history of English portraiture and its inheritors Lucian Freud, Francis Bacon, and Chris Ofili. Even while some figures are loosely framed within the conventions of portraiture, the artist’s richly hued backgrounds and undulating bodies blur a clear distinction between figuration and abstraction. Painted within the logics and systems of color field paintings, the works’ repeated motifs, when seen all together, begin to mimic the designs of Dutch wax-printed fabric. In his imagined mythologies, Adeniyi-Jones both explores and gives new meaning to West African aesthetic traditions.Adeniyi-Jones received his BFA in Fine Art from Oxford University and his MFA in painting and printmaking from the Yale School of Art.