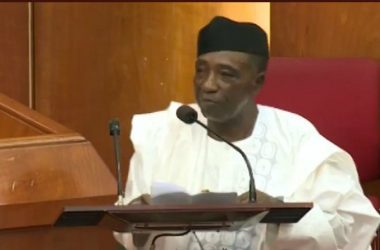 The Minister of Agriculture and Rural Development, Sabo Nanono says Nigeria is producing enough to feed itself, contrary to the narrative in some quarters that there is hunger in the land.

Mr Nanono said this at a news conference on Monday in Abuja as part of activities to mark the 2019 World Food Day being celebrated internationally on Oct. 16.

He said it was wrong to promote the idea that there was hunger in Nigeria, adding that there were only inconveniences being addressed by the Federal Government and relevant stakeholders like the Food and Agriculture Organisation, FAO.

According to the minister, the world food day is set aside to discuss food production.

“From what I am seeing in this conference room, there is no sign of hunger but obesity. Only a few people like me are either trying to balance their diet or is it fasting that is responsible for the way some of us look?

“The policy of the present government for us to feed ourselves is key. In the process value chains are being created to empower people and give out some jobs.

“I think we are producing enough now to feed ourselves and I think there is no hunger but if you say inconveniences I would agree.

“When people talk about hunger I laugh because they do not know hunger. If you go to other countries you will see what hunger is.

“Food in Nigeria is fairly cheap compared to other countries. In kano for instance, you can eat N30 worth of food and be satisfied. So, we should be thankful that we can feed ourselves and we have relatively cheap food in this country,” he said.

On fears that insecurity and flood may lead to food shortage, the minister said while it was true that there were challenges in some states.

According to him, reports from Gombe and Bauchi states where I visited a few days ago, showed that there will be bumper harvest.

“Although, there has been flood and insurgency but I think the surplus that will be created in other parts of the country will balance up food shortage in other areas.

“In Nigeria, we are lucky that one of the food security spot is in Dawano market, Kano. But what we need is to reorganise our markets to solve the problem of malnutrition and other issues,” he said.

The minister noted the narrative of hunger was erroneous, noting that Nigeria was a buffer zone for migration for the rest of West African sub regions.

He explained that there were lots of people from other African countries in Nigeria, who often blend into the system and were not easily identified except for their assent.

On border closure, Nanono said that the report from farmers and dealers in rice and other commodities was that of commendation.

He said although many people were not comfortable with the development when it happened, the testimonies that followed the closure were encouraging.
NAN