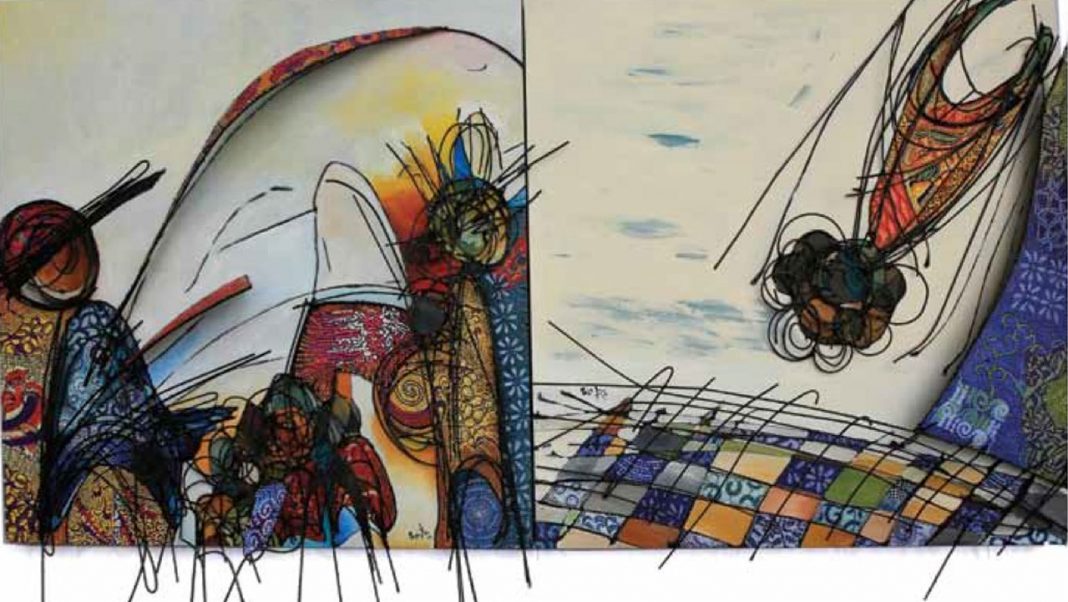 In 2015, a survey called Nigeria Art Market Report, published by Foundation for Contemporary and Modern Visual Arts (FCMVA) valued the country’s art economy through the prism of the secondary art market. “The value of artworks sold at auction in Nigeria declined for the second consecutive year from $1.77 million in 2014 to $1.37 million in 2015,” the report explained.

Two years after, the economic space has shrunk into recession and perhaps, currently, on its way towards recovery. Tracking the Nigerian art market as contributing index into the mainstream economy may be incomplete without considering sales in the diaspora. From London sales at Bonhams, twice a year, to the Sotheby’s debut auction this year, in the same city for African artists, it is complex to establish the value or importance to the local economy of participated artists. Similarly, U.S.-based Njideka Akunyili Crosby, whose auction records have risen, surprisingly to the million-dollar mark in just a few years, does not have any spot in the Nigerian art market. Her gallery representative, Victoria Miro, is in London, just as her works at both primary and secondary market have no link to the Nigerian art economy.

Given the total from Arthouse sales, the primary market and perhaps Sogal auction, the value of Nigerian art market should be close to half a billion naira or little more for 2017. In fact, if the value of Art-X Lagos – both art sales and branding – is included, the worth of the Nigerian art market in 2017 could be higher than half a billion naira. As at press time, figures from Art-X Lagos were not available.

One of the authors of the referenced ‘Nigeria Art Market Report,’ Castellote, a few days ago agreed that without including the diaspora sales, the half a billion naira worth of art business in 2017 is still possible. “If you do not include them (Bonhams and Sotheby’s sales), then half a billion may be right or a little low,” Castelotte, author of a new book, Collecting Art: A Handbook, said.

However, pushing art into the country’s larger economy may require the involvement of the stock market. Perhaps an unfolding initiative in Europe may just be a future model.

Designed as the art of NASDAQ, it’s called ARTSTAQ, a kind of stock exchange for art.
Based in London and Prague, the initiative, launched two years ago, offers an online marketplace, which is said to “provide completely transparent data for buyers and sellers of art.”

When the global economy had a meltdown in 2008, the art market was insulated, so suggested sales in most of the developed countries. But by the first quarter of 2009, both the primary and secondary art markets started nose-diving. In fact, one of the biggest casualties was the contemporary art market.

In Nigeria, the signal was not missing during the same period. However, a year-old West Africa’s premier auction house and Lagos-based Arthouse Contemporary did not hold its November 2009 edition. Though no official statement was made for not having a third auction, the reason, observers argued, was connected to the global economic recession.

Interestingly, the last two years provided similar challenges for the Nigerian art market. But the results of the last auction at Arthouse’s 19th edition, held on November 27, 2017, at Kia Showroom, Lagos, further confirmed the resilience of the Nigerian secondary art market against Nigeria’s economic recession. According to official results released, 60 per cent sales were recorded with total lots sold at NGN109,212,500 million. The 60 per cent sold was from a total of 99 lots put up for sale.

Across big art hubs in the world, sales in art galleries and art fairs also contribute significantly to the index of art market. But the secondary market in Nigeria – via three auction houses – provides major leads to the country’s art market. In a country with one city, Lagos, as its art hub, sales at galleries, and lately from one art fair, are always unknown to the formal financial sector and the public in general. This leaves only the auctions to provide market index that drives the nation’s art economy.