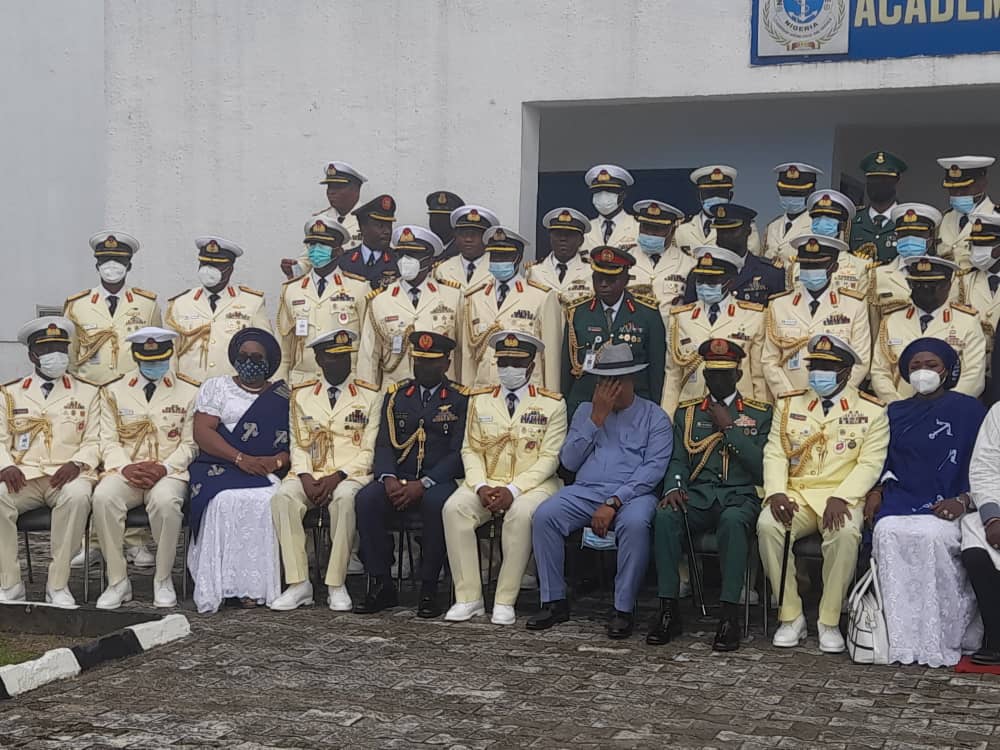 The Naval War College, Nigeria, NWCN, has graduated 22 senior officers drawn from the Navy, Army and the Air Force, the News Agency of Nigeria reports.

The 22 graduands, comprising of 18 Naval officers, two Air Force officers and two Army officers are participants in the `Naval Warfare Course 5′ of the College.

Speaking during the graduation ceremony on Friday in Calabar, the Minister of Defence, Bashir Magashi, said that the Nigerian Government would continually support the military’s effort in protecting the territorial boundaries of the country.

Represented by the Chief of Defence Staff, Lucky Irabor, the Minister of Defence said that Nigeria is currently facing a lot of threats affecting the overall security of the nation.

He said that although such threats are not peculiar to Nigeria, they are characterised by the increasing threats of non-state actors.

According to him, the Armed Forces of Nigeria was engaged in various operations across the country to curtail the security challenges, especially the insurgency in the North East, banditry, kidnapping and other criminal activities in other parts of Nigeria.

“A few sectional agitators have attempted to propagate decisive narratives, but the Armed Forces has remained committed to its responsibility of securing the territorial integrity of Nigeria.

“I must salute the efforts of the armed forces and indeed the Nigerian Navy for its significant contributions towards improving national security, both in the nation’s maritime domain and the hinterland.

“To our graduands and future operational commanders, I must say that it is your responsibility to understand and situate yourself in the complexities of the global contemporary security environment,” he said.

He congratulated the participants for successfully graduating from the College and urged them to use what they have been taught during the course for the benefit of Nigeria’s security environment.

The Commander of NWCN, Rear Adm. Murtala Bashir, said that since the establishment of the College in 2017, the College has trained and graduated officers from the Navy, Army and Air Force.

According to Bashir, the College is designed to be a centre of excellence on naval/joint military operations and maritime security studies in the sub-region.

He said that inter-agency seminar, organised during the course work, included sea trips to showcase the peculiarities in the maritime environment and how to curb emerging maritime threats.

“The graduands are now finished product ready to be deployed into the field to contribute their quota towards security provision in the country.

“I want to thank the Chief of the Naval Staff, Vice Adm. Awwal Gambo, the Senate and House of Representatives Committees on Navy for their support towards the growth of the College,” he said.

Earlier, the Chief of the Naval Staff inaugurated some projects within the Eastern Naval Command as part of his visit to Calabar.

The projects are the remodeled office complex of the Flag Officer Commanding Eastern Naval Command, the remodeled main gate and new reception complex and the remodeled Eastern Fleet building.

Others are the duty watch station at the Nigerian Navy Ship Victory and the Naval War College House at Summit Hills area of Calabar.