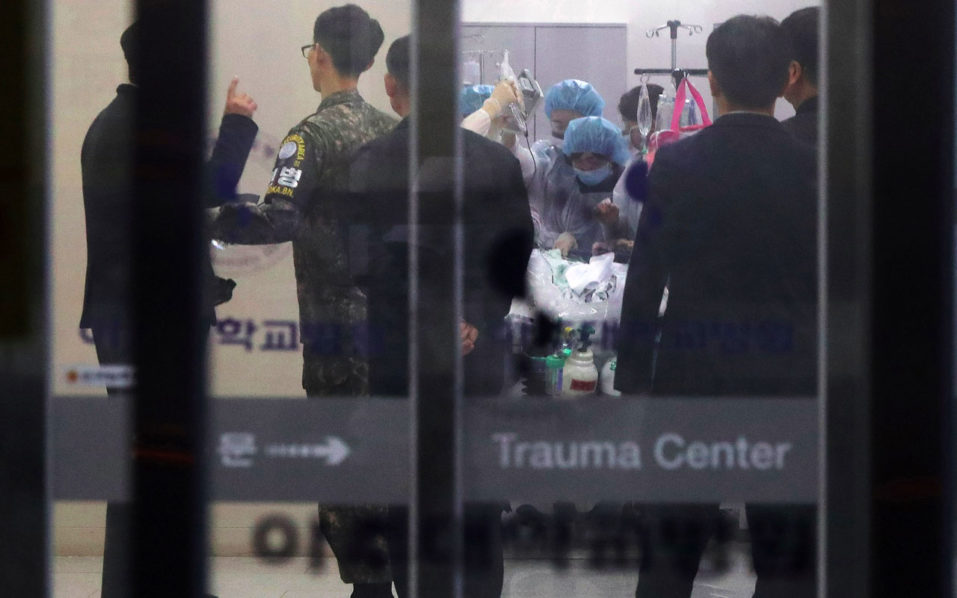 A South Korean military officer (2nd L), wearing an armband of the Joint Security Area of Panmunjom, looks on as medical members treat an unidentified injured person, believed to be a North Korean soldier who defected, at a hospital in Suwon, south of Seoul, on November 13, 2017. A North Korean soldier was shot and injured by his own side on November 13 while defecting to South Korea at the border truce village of Panmunjom, the South’s military said. / AFP PHOTO / YONHAP / str / – South Korea OUT / REPUBLIC OF KOREA OUT

A North Korean soldier defected to the South on Thursday across the Demilitarized Zone that divides the peninsula, Seoul’s defence ministry said.

The “low-ranking” soldier made his way across the central part of the land border, a ministry spokesman said.

It came a month after a rare and dramatic defection by a soldier at Panmunjom, the truce village where opposing forces confront each other across a concrete dividing line.

On that occasion the defector drove to the heavily-guarded border at speed and ran across under a hail of bullets from his own side. He was hit at least four times.

Footage showed the badly injured man being pulled to safety by two South Korean soldiers who crawled to reach him just south of the demarcation line.

He has since been recovering in hospital in the South.

Thursday’s defection was the fourth by a soldier across the DMZ this year.

The soldier appeared at a guard post in thick fog on Thursday morning, the Yonhap news agency cited the South’s Joint Chiefs of Staff as saying.

No shots were fired and no unusual movements of Northern troops had been detected, they added.

Away from Panmunjom, the rest of the 4-kilometre-wide DMZ bristles with barbed wire and is littered with minefields, making any crossing extremely hazardous.