Oyeniyi out with Terrorists in the Cockpit 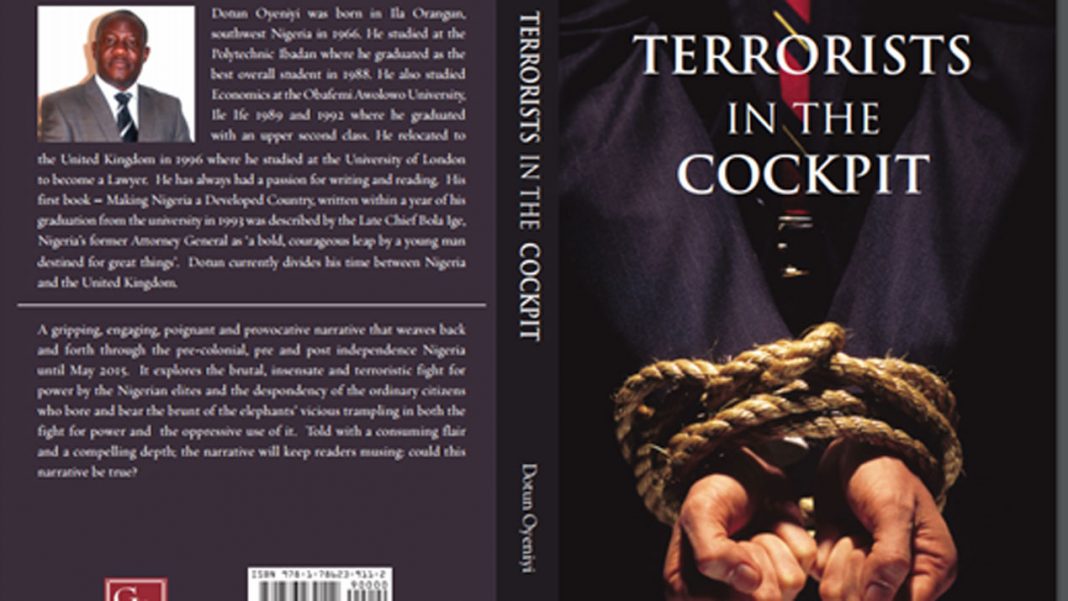 When bad leaders are in office, the destiny of the people is in jeopardy. It, therefore, calls for people with the best characters to be in the position of authority. This is the central message in a new book Terrorists in the Cockpit, written by Dotun Oyeniyi (Grosvenor House publishing Ltd, United Kingdom).

Oyeniyi in the book likened a country to a plane and its leaders to pilots. He explains that when a country elects its chiefs of state in a democracy, or a military officer forcefully imposes himself over it as the head, for all intents and purposes, the collective fate of the citizens of that country is in the hands of that head, who, like a pilot is in the cockpit, navigates the state’s plane at the altitude and airspeed that suit him.

“While the chief of state is the pilot, other senior government functionaries are the flight attendants,” he states and goes further to state that when the acts of the leaders wreak havocs that are tantamount to terrorism on the citizens, or when leaders deliberately employ terrorism against their own citizens, it is reasonable to conclude that terrorists are in the cockpit.

Oyeniyi says, “In Nigeria, the post-independence competition for the control of the cockpit made the nation to vacillate between military and civilian rules, with the former having a more prolonged stay in the cockpit, under rulers and leaders, who mostly place self-interest over the common good of all. There are also the implicit acts of terrorism resulting from the voracious avarice of Nigerian leaders, whose untamed kleptomania has crippled a potentially giant nation and improvised a potentially rich people.”

He laments that the wealth of the country in oil revenue are squirrelled into private foreign accounts of the occupant of the cockpit and their proxies, adding, “Apart from the grandiose buildings that litter the grounds of the Nigerian capital city, Abuja, and other major cities, there are plentitude of houses in London, Washington D.C., Abu Dhabi and other major cities of the world owned by Nigerian leaders. These houses are perennially on lock-up, to be opened a few days in a year when their owners visit. The passengers in the Nigerian aircraft are left largely to live in endless patchwork of mud houses under rusted roofs.”

However, the author does not stop at the ills that rock the country, he also proffers solutions to the problems, pointing out that the judicial system must be shielded from partisan influence.“It must stoop to no one but the law,” he asserts. “The judiciary has an important role to play in this country, as it is the last hope of the common man. It has to be firm, fair and courageous and must not employ any form of double standards.”

He also advocates an electoral system that guarantees the emergence of candidates without fraud, adding that it would ensure peace, stability and concession of authority to those in public offices.

He notes, “Free and fair elections are necessary to establish a democratic, human rights based society, and to ensure that the government and the state are legitimate. When leaders retain their position through sham elections and by leaving the opposition no realistic chance of winning, dictatorship becomes caked in quasi-democracy.”

The last chapter of the book captioned, “Towards a people’s government,” chronicles solutions to bail Nigeria out of the problem it has found itself including erecting a wall between the state and religion, true federalism, quality education for the citizens, unity and love of diversity, sanctity of justice, equality before law, strong and independent judiciary, electoral system with transparent integrity, and free market economy.

“Until the people of a nation apply close to the same zeal to the planting of flowers in their frontage, as they do to the planting of cassava in their garden, they might not have successfully built a people’s government and are likely to have terrorists in the cockpit of governance,” he concludes.