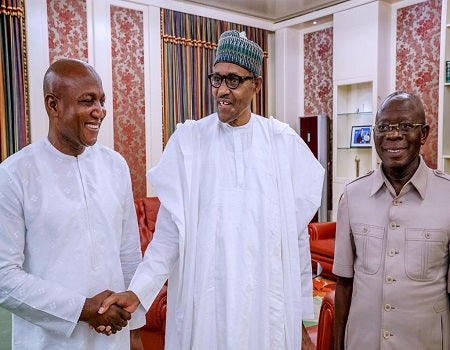 The presidency has told the Peoples Democratic Party, PDP, to accept the outcomes of the Kogi and Bayelsa gubernatorial polls with grace, saying the opposition’s rejection of the results is a disgrace.

In a statement issued by Garba Shehu, Senior Special Assistant to the President on Media and Publicity, in Abuja on Monday, it observed that it is predictable that PDP had raised allegations of fabricated results on the elections.

The statement said this happens each time the poll result does not favour the opposition.

It said: “Predictably, we have seen the accusation of fabricated results from the opposition Peoples Democratic Party, the PDP. Yet, the only fabrication is PDP’s conduct.

It has now become standard procedure for the party to challenge any poll that does not return its candidates. Election is good when the PDP wins. The opposite is the case if any party other than the PDP wins.

The presidency recalled that February 2019 election saw the loss of five APC governors, adding: “The government accepted the results. In doing so, we realised that we did not win the argument in those contests, and so we didn’t win enough votes.

We retired to assess what went wrong: were we responsive enough to the electorate’s needs and priorities? How can we improve on speaking to the nation’s hopes? We got ready and prepared ourselves well for the next contest. The result is a healthier, more rigorous election.

“In rejecting the results as PDP has done, this reflection does not happen. Instead, the electorate gets mudslinging. Improvement is not sought, but cries of victimization; this is not an atmosphere in which democratic debate can thrive.

“Opposition strategy of attacking the electoral commission, security agencies, government at the centre and the person of President Muhammadu Buhari after each election loss is antithetical to healthy democratic norms.

“Candidates and parties, especially those that have lost, are not told to examine their campaign tactics and strategies with a view to improving their chances for the next election. The result of not doing this is a loss for the electorate and for the parties concerned.

“We call on APC supporters to show dignity in victory, and for all Nigerians to remain peaceful in the wake of these elections. We call on PDP to learn to be democrats. We must now come together to build a brighter future for Nigeria.”