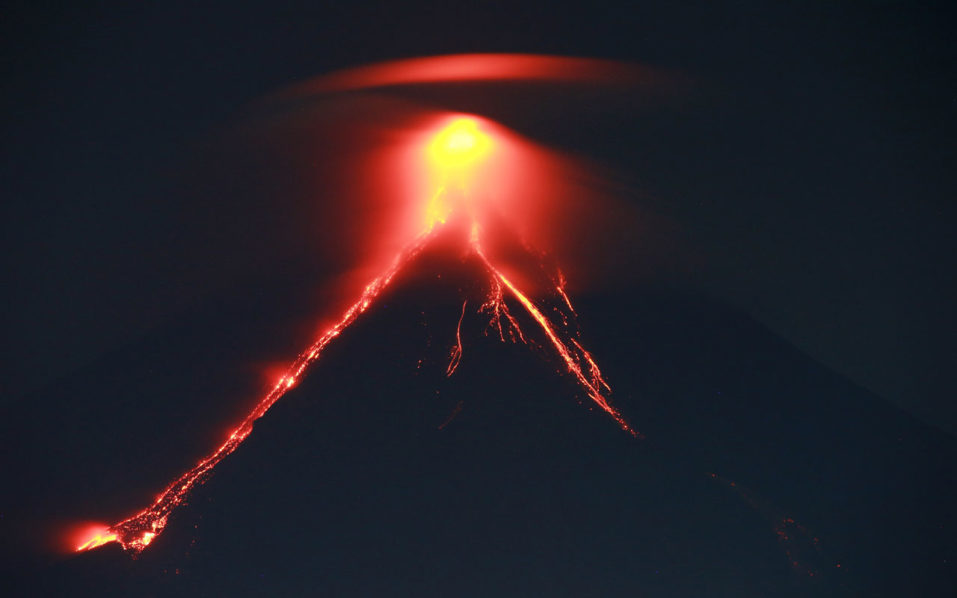 This photo taken on January 15, 2018 shows lava cascading the slopes of Mayon volcano as it erupts, as seen from Legazpi City in Albay province south of Manila. Spectacular lava “fireworks” shooting from its crater are drawing tourists to the Philippines’ most active volcano, authorities said as scientists warned of a potential dangerous eruption within days. / AFP PHOTO / CHARISM SAYAT

Spectacular lava “fireworks” shooting from its crater are drawing tourists to the Philippines’ most active volcano, authorities said Tuesday as scientists warned of a potential dangerous eruption within days.

Lava spurting from Mayon volcano lit up the sky overnight Monday in what scientists said was a sign of increasing activity that prompted official calls for evacuation of areas under threat from a major eruption.

But even as thousands of residents flee, tourists are flocking to the area, some 330 kilometres (205 miles) southeast of Manila to watch and photograph the spectacle, Danny Garcia, a spokesman for Albay province told AFP.

“It’s a spectacle to watch. It’s beauty and fury in one, especially at night. But it’s a natural phenomenon so we don’t know when an (explosive) eruption will happen,” Garcia added.

Mayon, a near-perfect cone that also draws thousands of tourists during its periods of quiet, rises 2,460 metres (8,070 feet) above Legazpi, a city of about 200,000 people surrounded by a largely agricultural region.

The state volcanology institute described the natural pyrotechnics as “short-duration lava fountaining”, an escalation from the slow lava flow from the crater a day earlier.

“If lava has enough gas and material, fragments will be flown up into the air, like the fountain you light up on New Year’s Eve,” Renato Solidum, head of the Philippine Institute of Volcanology and Seismology (Phivolcs), told AFP.

“There is more force involved when the lava would exit so it’s more intense than just the lava oozing out.”

Ash also rose two kilometres into the sky in the past 24 hours, enveloping surrounding areas in a grey carpet as more residents left their homes for safety.

About 30,000 people in and around Legazpi have fled their homes, the provincial government said on Tuesday, more than double the official count on Monday.

However hotels reported getting more tourist bookings while people flocked to viewing decks to watch the volcano from a distance, the provincial government said although it gave no specific figures.

The Philippines is part of the Pacific “Ring of Fire” of islands that were formed by volcanic activity, and is perennially under threat from 22 active volcanoes.

The most powerful explosion in recent years was the 1991 eruption of Mount Pinatubo, about 100 kilometres northwest of Manila, which killed more than 800 people.

Scientists said it was highly unlikely Mayon would have a similar eruption.

“It erupts quite often, and volcanoes that erupt frequently tend to have smaller eruptions than those that erupt less frequently,” David Rothery, a geosciences professor at The Open University in Britain, told AFP.