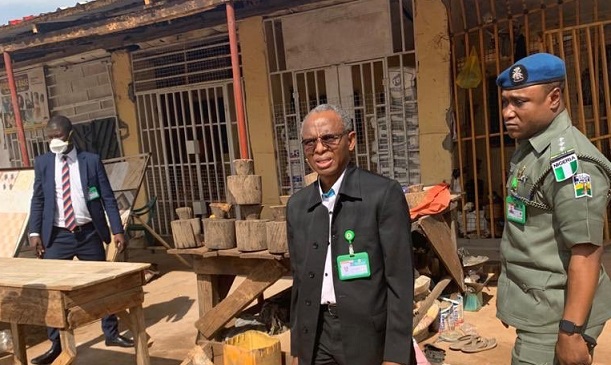 Markets and shops have remained closed in most parts of Kaduna metropolis as traders complied with the directives issued by the state government for the closure of businesses in order to contain the spread of the Coronavirus.

News Agency of Nigeria reports that the government had said that only traders selling foodstuffs and related items as well as medicines would be allowed to operate.

A check on Wednesday in areas such as Tudun Wada, Rigasa, Kasuwa, and other places indicated full compliance with the order, as businesses remained shut.

Streets where electronics, used clothes and other non-consumable items are sold at central market in Kaduna, were similarly under lock and key.

Makarfi and Royal plaza, known for their busy phone and phone accessories markets and located within the central market, were also under lock.

NAN, however, reports that commercial vehicles, including tricycle, were seen operating.

The Rigasa train station was virtually empty except for a few roadside traders.

NAN reports that Gov. Nasir El-Rufai had in a broadcast expressed disappointment on the low level of compliance by most residents, who ignored earlier directives.

The governor said that measures taken to protect residents from COVID-19 would be vigorously enforced by security agencies and officials of Kaduna Markets Development and Management Company.

NAN reports that the Kaduna Government had on March 24 fumigated some market places in Kaduna.

Speaking to NAN, a resident, Aisha Gambo, appreciated the response of residents to the directive which she said ought to have been taken earlier.

“What is currently taking place in Kaduna State should have been the steps taken by the Federal Government early in the days of the global pandemic.

“Early steps would have gone a long way to contain the virus.

“We always take things in this country for granted and that is why we keep on suffering on certain issues we ought to have taken more seriously,” she said.

Esther Oluwatoyin, a businesswoman at the central market and a resident of Lagos street in Kaduna, spoke in a similar tone.

She, however, urged the people to ensure strict adherence to directives from health officials and other constituted authorities.

“We need to take things seriously in order to protect ourselves from the virus.

“Nobody knows what will happen in the near future, the earlier we adhere to the directives the better for everyone. This is not the time to play pranks,” Oluwatoyin said.