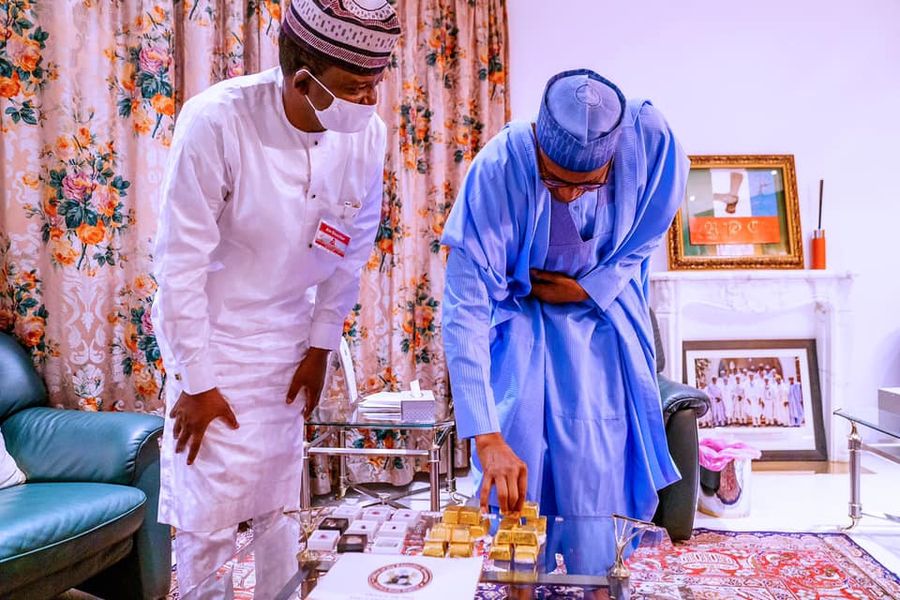 Zamfara State governor, Bello Matawalle, on Monday, presented to President Muhammadu Buhari some specimens of gold and other precious minerals mined from solid mineral deposits in the state.

The President’s Special Adviser on Media and Publicity, Femi Adesina, posted the development on his Facebook page Tuesday.

Recall that the Nigerian Government had in April 2019, announced a total ban on mining activities in the state following incessant bandit attacks.

However, the Minister of Mines and Steel Development, Olamilekan Adegbite, had on January 24, said plans were underway to re-start mining activities in the state.

According to the minister, the government plans to remove the ban by the end of the first quarter, in order to pave way for “genuine investors” who want to invest in the mines.

“The ban is about to be lifted because of a lot of genuine investors who want to come (to invest) into Zamfara state.”

“When the ban came into effect there were a lot of investors who were already putting in money had to stop… they are anxious to realise their investments.”

The Minister also assured that the wave of violence that hit the region has been contained, thanks to a surveillance team that was deployed there for that purpose.

Nigeria’s untapped minerals: Crude oil is not the only natural resource that can be found underneath Nigeria.

The country is also blessed with deposits of gold, tin, nickel, zinc, and other precious stones scattered across the country. But these solid minerals have mostly been untapped due to Nigeria’s focus on oil and gas.

The government’s seeming preference and focus on oil has given rise to artisanal mining of solid mineral.

Reuters estimates that 80% of the solid mineral mining in the country are carried out illegally.

On a monthly basis, about 500 kg of gold is reportedly smuggled out of the country into neighbouring countries like Niger and Togo from where the raw materials find their way to the Middle East.

What this means, therefore, is that Nigeria is losing millions of dollars on a monthly basis. It is high time for the government to really standardise solid mineral mining in the country.

This is a good way to diversify the economy.