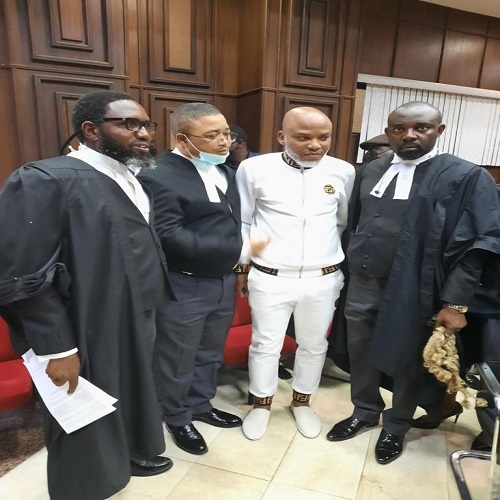 The self-acclaimed leader of the Indigenous People of Biafra, IPOB, Nnamdi Kanu, has appeared before the Federal High Court, Abuja for the continuation of his trial over alleged treasonable felony charges preferred against him by the Federal Government.

The IPOB leader’s lead counsel, Ifeanyi Ejiofor, disclosed this to newsmen at the premises of the court.

Meanwhile, there is tight security at the court Abuja as large number of security personnel were deployed to the court premises and it’s surrounding to forestall any breakdown of law and order.

Entrances leading to the court premises were barricaded by a combination of gun-wielding State Security Services, SSS, operatives, the Army, Nigeria Security and Civil Defence and men of the Nigerian Police.

At about 8:02am, a heavily fortified security convoy arrived the court premises, which appeared to be carrying Mr Kanu.

As at the time of filing this report, journalists, lawyers and litigants were standing outside the court premises as they were denied entrance.

Mr Kanu was brought into the court premises under a heavy security convoy at exactly 8 am.

Recall that the Federal Government had filed amended seven count charges against the detained IPOB leader.

The amended charges, which were filed by the office of the Attorney General of the Federation and Minister of Justice, border on treasonable felony and Mr Kanu’s alleged involvement in acts of terrorism.