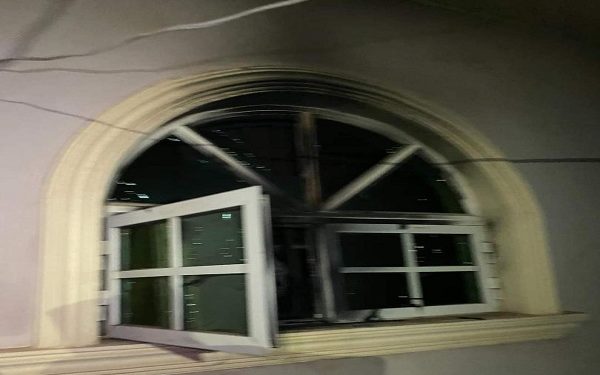 In what looked like a reprisal attack, suspected hoodlums believed to be Fulani herders have razed down a house belonging to the Yoruba activist, Sunday Igboho, in the Soka area of Ibadan, Oyo State.

Recall that following the expiration of a quit notice Mr Igboho reportedly gave to the Fulani settlements in Oyo State, some youths believed to be the activist’s followers had on Friday night raided the residence of the Sarkin Fulani in the state, and set several other houses on fire.

Mr Igboho also went to the area to enforce his seven-day quit notice to the Fulani herdsmen in the area.

Angered by the development, the irate youths suspected to Fulani herders, in connivance with some Yoruba hoodlums, raided Mr Igboho’s residence in the early hours of Tuesday, shooting sporadically in the air.

It was also gathered that the group was loaded in a bus and a taxi razed the residence.

Confirming the incident, the spokesman of Oyo State Police Command, Gbenga Fadeyi, in a statement on Tuesday, said the hoodlums came to the house in the early hours of Tuesday in a Hummer bus and Micra firing sporadically and later set the house ablaze.

Mr Fadeyi added that the amount of other properties burnt is yet to be estimated.

“At about 0620 hrs of today 26/01/2021, a report was received at the Santo Police Station that some unidentified hoodlums came to Sunday Igboho’s house at Soka area of Ibadan in a Hummer bus and Micra ( taxi) firing sporadically, and set the house ablaze.

“The mini sitting room got burnt in the process while the value of other properties is yet to be estimated.

“Immediately the DPO Sanyo got a wind of the incident, he contacted fire service while he also went to the scene for on the spot assessment.

“The fire was eventually put out. An investigation has commenced into the incident while the Police are on the trail of the hoodlums.”

Reacting to the incident, Mr Igboho, according to a report by The Nation, accused some Yoruba people of conniving with the Fulani herders to burn down the residence.

He said:  “What I find surprising is that some Yorubas are in support of the herdsmen to set my house on fire. I’m saddened by it,” he said.

He, however, said he didn’t have the full details of those who committed the arson.

The Federal High Court, Abuja, on Wednesday, ordered a stay of proceeding in the ongoing trial of the former Head of Service, HoS, Winifred Oyo-Its, and others.
Read more