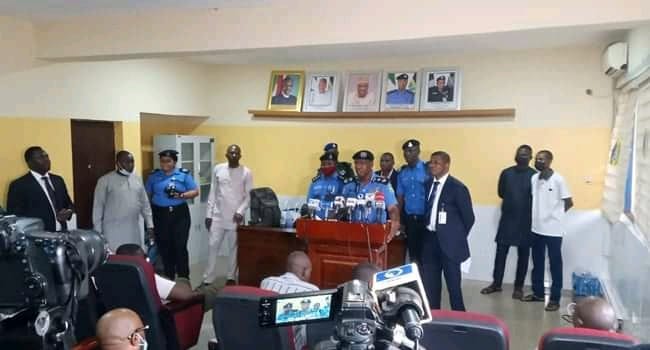 The Police on Thursday said they have arrested 14 suspects in connection with the Oct. 29 invasion of Justice Mary Odili’s house in Abuja.

Parading the suspects at the Force Criminal Investigation Department, FCID, Headquarters, the Force Public Relations Officer, Frank Mba, said seven of the suspects, including two soldiers, were still at large.

Mr Mba noted that the criminals were loose cannons and document forgers who were on their own and not hired by any personnel of the Ministry of Justice as they claimed.

According to the Spokesperson, the suspects conspired to raid the residence following information that the Supreme Court Justice was keeping a large sum of money in foreign currencies.

Describing the suspects as a syndicate gang who specialises in operating as law enforcement officers, Mr Mba said that they came from different professional backgrounds

“The crime syndicate includes Lawyers, Military personnel, accountants, Journalists and others who impersonate other profession, ” he said.

He commended the resistance by the security personnel deployed to the Odili residence for not allowing the suspects access to the premises, stating that it would have been a great embarrassment to the nation before the international community if the operation had succeeded.

One of the suspects, Lawrence Ajodo, who fraudulently portrays himself as a policeman and an operative of the Economic and Financial Crimes Commission, EFCC, at the same time added that he followed a hint that came to him.

He also confessed to have forged the signature of the Attorney General, adding that he was not deployed on the mission to raid Odili’s house by Mr Malami.

According to the mastermind, I work for Malami as a consultant of recoveries, there are five of us. I was given 18 accounts to recover.

“Malami did not send me to this mission. I am a banking expert with specialty in finance and forensic,” Mr Ajodo claimed.

Mr Ajodo also claimed that there was a mix-up during the raid stating that the search warrant was supposed to be for No 9 but it read No 7, adding that they revoked the warrant as soon as they noticed the mix up.

Mr Mba noted that the journalist among the syndicate, Stanley Mkwazama  said he was following a story lead on that day and was not part  of the whole criminal intentions of some others.

“The whistle blower, Ali Umar Ibrahim said  that he swore an affidavit that there were millions of money starched in Justice Odili’s House because he got the hint.

“He added to confirm this suspicion, he introduced himself as a prayer warrior  to the godson of Justice odili and he prayed to know if the story was true  and he decided to go through the EFCC as a formal channel only for him to be linked with fake officials of the anti-corruption agency.

Mr Mba added that the suspects would be charged to court as soon as the police concluded its investigation.