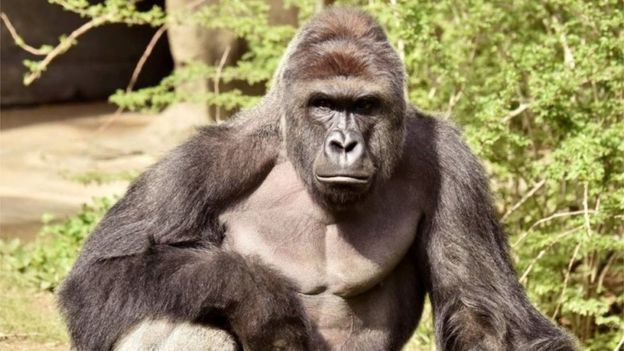 Kano State Police command has reacted to the viral story that gorilla snatched and swallowed the whopping sum of N6.8 million, said to be five-day proceeds made from Sallah celebrations.

DAILY NIGERIAN reports that the story was filed in by BBC Pidgin and carried by The Cable on Friday.

However, in an interview with DAILY NIGERIAN correspondent on Friday, spokesman of the command, Abdullahi Haruna offered some explanations into the saga.

According to him, the command received a distress call that some hoodlums attacked the staff of the zoo in the night and carted away with the sum of N6.8 million.

He added that on receiving the complaint, the command promptly dispatched its men to the scene of the incident.

Mr Haruna added that ten persons, including officers and security guards on duty had been arrested.

“Yes, we received a distress call that the money made from five days of Sallah festivities, amounting to N6. 8 million is missing from the Kano zoo.

“We promptly dispatched our men. As at now, we have arrested 10 members of staff of the zoo including the security men and those working in the finance unit,” he said

The spokesman also disclosed that investigation is ongoing to unravel the mystery behind the missing of the money.

However, this newspaper gathered that Umar Kobo, the managing director of the zoo, confirmed that the money is missing and that the issue is being investigated.

“The issue is under investigation for now and I don’t want to say anything on the matter. Many journalists have come to meet me but I don’t want to talk anything. What I can confirm is that money is missing,” he told the BBC Pidgin.

Kano State Police command has arrested 31 persons suspected to have vandalized private malls and carted away valuables in the wake of EndSARS protest in the state.
Read more

There was a violent protest in Kano State on Monday morning, when some policemen attached to the Shahuci Area Command allegedly killed one Saifullahi of Kofar Mata Babban Layi, in the Kano Municipal Local Government Area of the state.
Read more
Newsletter

The Kano State Police Command has apprehended a 30-year-old businessman, Yusuf Abdullahi, over alleged involvement in the diversion of N4,111,800 worth of noodles, a palliative donated by the Coalition Against COVID-19, CACOVID.
Read more