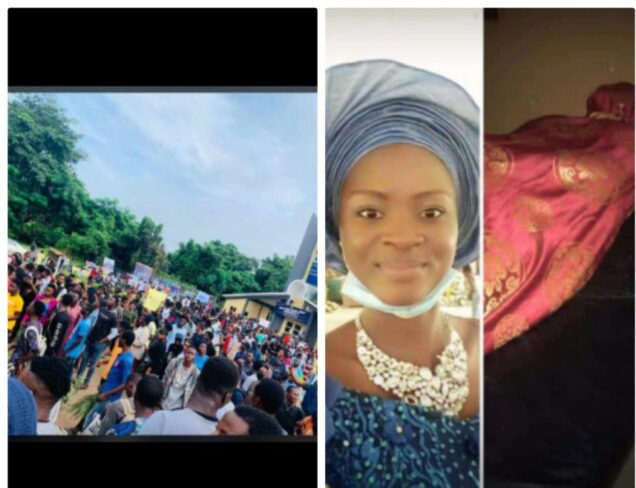 Students of the Obafemi Awolowo University, OAU, Ile-Ife in Osun, on Friday protested the death of a 400-level student of the institution, Aishat Adesina.

The students, who blocked the major roads leading to the campus for several hours, accused the university’s health centre of negligence in Aishat’s death.

The students said the health centre’s response to the deceased when she was brought in was not good enough.

The OAU Public Relations Officer, Abiodun Olanrewaju, while addressing the students, said the allegation was  not correct.

Mr Olanrewaju said that staff at the health centre tried their best when the deceased was brought in.

He said when the medical staff could not handle the case the deceased was immediately referred to a secondary hospital but Aishat later died at the hospital.

Mr Olanrewaju appealed to the students to always tow the path of dialogue rather than protest to address issues.

Meanwhile, the authorities, in a statement, said the deceased was a 24-year-old student of the Department of Foreign Languages, Faculty of Arts.

According to the statement signed by Mr Olanrewaju, the deceased reported to the school’s  health Centre on Sept. 28, with symptoms of a severe infection.

He added that the deceased was promptly treated with some prescribed drugs  and  was asked to report as an out-patient.

“Miss Adesina reported back to the health centre of the institution in the morning of Thursday, Sept. 30.

“After further examination, she was referred to a hospital for further management, where she regrettably died.

“The management sympatises with the parents, friends, colleagues and the entire students of the university on this sad loss and pray for the repose of her soul.

“The management will like to appeal to all students to remain calm and refrain from any act that can jeopardise the peace on campus and truncate the on – going  Semester examinations,” he said.