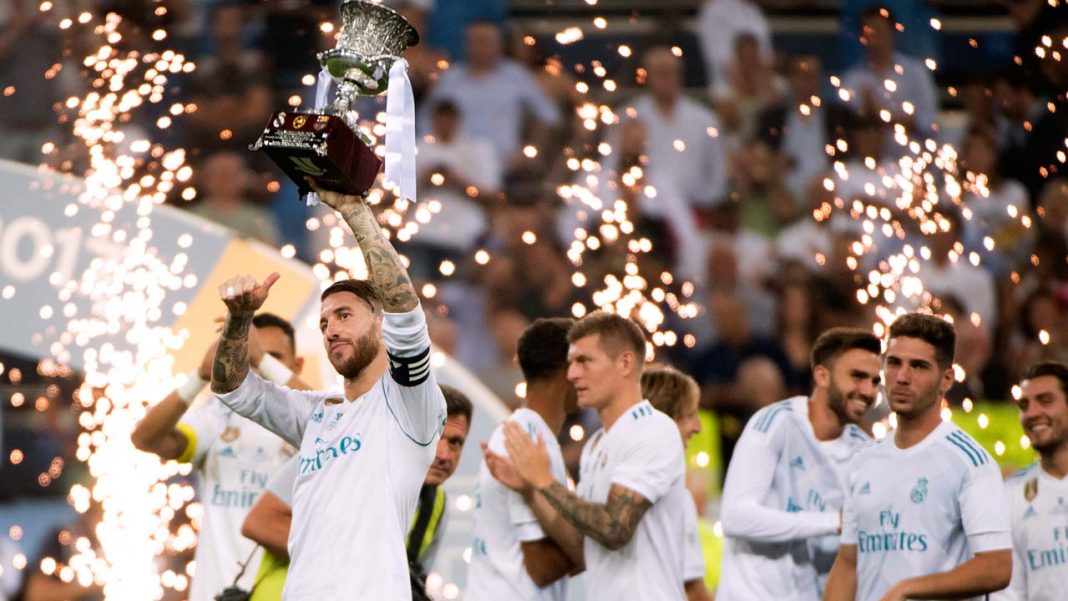 Real Madrid’s defender Sergio Ramos (L) holds up the trophy as he celebrates their Supercup after winning the second leg of the Spanish Supercup football match Real Madrid vs FC Barcelona at the Santiago Bernabeu stadium in Madrid, on August 16, 2017. CURTO DE LA TORRE / AFP

Real Madrid can round off the most successful year in the club’s already glorious history by claiming a fifth trophy in 2017 at the Club World Cup in Abu Dhabi this week.

They won La Liga, the Champions League, UEFA and Spanish Super Cup in a thrilling fashion after hitting top form in a four-month spell between April and August, but since then the European champions have faded, understandably fatigued by a heavy schedule.

Madrid trail Barca by eight points at the top of La Liga and finished second to Tottenham Hotspur in their Champions League group, which proved costly as they were paired with free-spending Paris Saint-Germain in a blockbuster last 16 tie on Monday.

However, traces of the Madrid that swept aside the likes of Bayern Munich, Juventus, Atletico Madrid, Manchester United and Barcelona in the spring and summer were back as Real hit five past Sevilla before half-time in a 5-0 rout on Saturday.

Until then Madrid had lacked the same killer instinct as last season with Cristiano Ronaldo and Karim Benzema scoring a combined total of just six times in La Liga, while Gareth Bale has made just one brief appearance as a substitute since September.

“We are improving in every sense,” said Zidane after thrashing Sevilla. “If you play well, you will create more chances. We created plenty of chances.”

Ronaldo scored twice at the weekend to celebrate picking up his fifth Ballon d’Or in style and his return to form is timely, as Madrid face Barcelona in their final game of the year on December 23 once their work in the Middle East this week is done.

“It is a reward just to be here,” said Madrid captain Sergio Ramos. “We have the opportunity to defend our title.

“We are preparing with plenty of desire and excitement. After a great game against Sevilla we are very motivated and our confidence is very high.”

– Tactical switch –
Real’s return to form coincided with a change of tactics from Zidane as the pace of Marco Asensio and Lucas Vazquez on the wings produced an instant impact.

However, if the Spanish duo are to keep their places then the French coach has to bench two of his preferred midfield diamond of Casemiro, Toni Kroos, Luka Modric and Isco.

After missing out at the weekend, Casemiro and Isco are expected to feature on Wednesday when Real take on local side Al Jazira, who have already dealt with Oceania’s Auckland City and Asian champions Urawa Red Diamonds to reach the last four.

“We know Real Madrid are one of the best teams in the world and this is incentive for all the players.”

Yet, after the scare of falling behind to Kashima Antlers in last year’s final before a Ronaldo hat-trick won the competition in extra-time, Zidane warned against complacency and thinking ahead to a potential final with Brazilian giants Gremio on Saturday.

The newly crowned South American champions take on Mexican side Pachuca in the other semi-final on Friday.

“Everyone thinks the game on Wednesday will be easy, but it won’t,” added Zidane.

“We need to think about Wednesday and doing things right to try and win this trophy once again.”