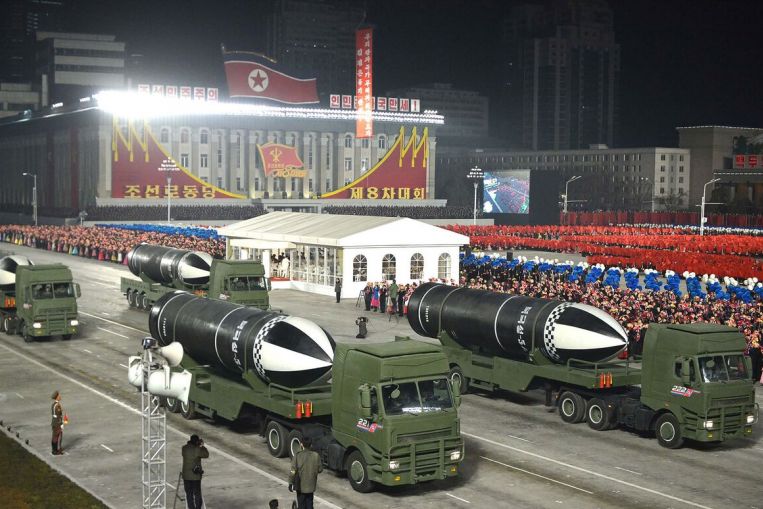 The South Korean military’s Joint Chiefs of Staff (JCS, said one missile was fired from near Sinpo on North Korea’s eastern coast into the East Sea, also known as the Sea of Japan.

No casualties or damage were reported and the missiles appeared to have already splashed down, a government spokesman cited by Japan’s Kyodo news agency said.

Citing informed sources, Yonhap also reported that the missile travelled a distance of up to 450 kilometres at a maximum altitude of 60 kilometres.

Experts believe the leadership in Pyongyang is putting more focus on militarising the country after a recent resurgence in weapons testing.

The missile launch was recorded by both South Korea and Japan on Tuesday morning, with Japanese Prime Minister, Fumio Kishida, speaking of two ballistic missiles.

The timing of the weapons test is probably no coincidence; it was only on Monday that envoys from the South Korean and U.S. governments met in Washington to discuss North Korea’s nuclear programme.

In addition, according to Yonhap, the intelligence chiefs of the U.S., South Korea and Japan are to hold talks in the South Korean capital Seoul on Tuesday, with Pyongyang’s nuclear threat also on the agenda.

North Korea, which is subject to international sanctions because of its nuclear weapons programme, has repeatedly tested missiles in recent months.

Most recently, a new anti-aircraft missile was tested in early October and in September a hypersonic missile that is difficult to intercept because of its great speed.

“North Korea’s renewed testing of ballistic missiles suggests the worst of domestic hardship between summer 2020-2021 could be over,’’ Chad O’Carroll, founder of the Seoul-based trade publication NK News, wrote on Twitter.

“Pyongyang tends to focus on one big strategic issue at a time, so the renewed testing could suggest military – later foreign policy – now priority,’’ he wrote.

The telephone and fax lines are central to communication between the two countries, which technically have never ceased hostilities from the Korean War and who do not have embassies in each other’s capital cities, Pyongyang and Seoul.

Seoul earlier this month expressed hope for the resumption of inter-Korean dialogue, while North Korean leader Kim Jong Un said the lines were being restored as part of efforts to improve relations and build peace on the Korean Peninsula.

UN resolutions prohibit North Korea from testing ballistic missiles, which, depending on their design, can also carry a nuclear warhead.

Negotiations between North Korea and the U.S. have not made any progress since Kim’s failed summit with then-U.S. president Donald Trump in Vietnam in February 2019.

Intra-Korean relations have also suffered from the stalemate.