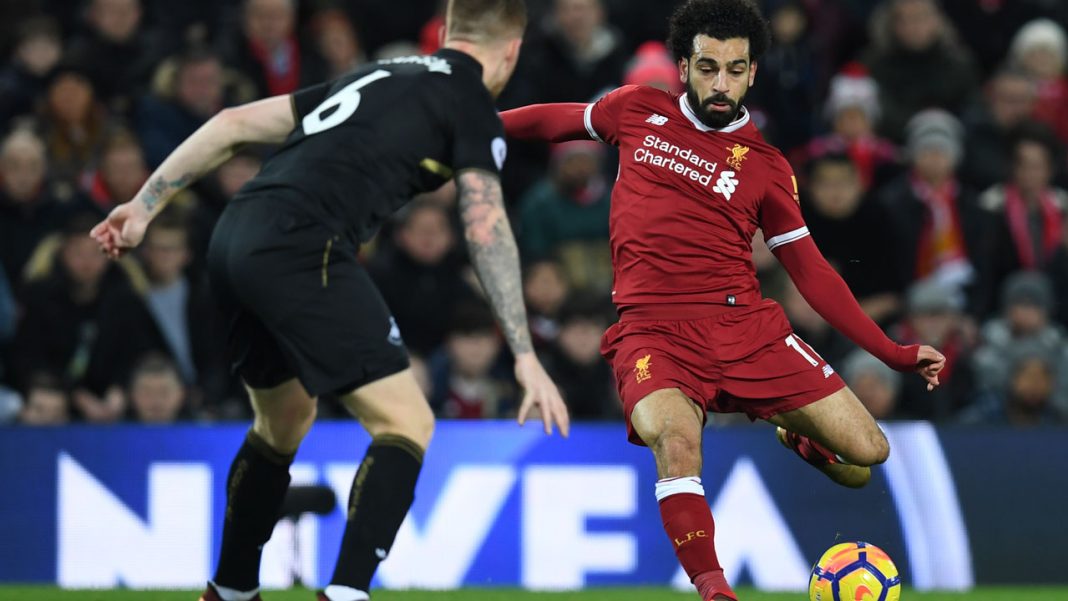 Liverpool celebrated Virgil van Dijk’s arrival at Anfield by coming from behind to beat Leicester City 2-1 thanks to Mohamed Salah’s brace, while Danny Drinkwater scored his first Chelsea goal in a 5-0 rout of Stoke City.

Van Dijk, signed from Southampton for a world record fee for a defender of £75 million ($100 million), isn’t able to play for Liverpool until January, but the flaws the Dutch centre-back will be asked to fix were on display as Leicester took a third minute lead at Anfield on Saturday.

With Van Dijk watching from the stands, Liverpool defender Joel Matip carelessly conceded possession and Riyad Mahrez set up Jamie Vardy to slot past goalkeeper Loris Karius, selected in place of the dropped Simon Mignolet, for his 10th goal of the season.

Liverpool couldn’t find a first-half equaliser despite having 12 shots, but they were level seven minutes after the interval.

Salah wasn’t finished yet and he won it for Liverpool in the 76th minute, turning away from Leicester defender Harry Maguire and firing in at the Kop end.

Liverpool, unbeaten in 12 league games, remain fourth and now hold a four-point advantage over fifth-placed Tottenham Hotspur in the race to qualify for the Champions League.

Antonio Conte’s side made the perfect start when German defender Antonio Rudiger rose above three Stoke defenders to head home from Willian’s free-kick in the third minute.

Eden Hazard was rested on the Chelsea bench, but his replacement Drinkwater did a passable impression of the brilliant Belgian, the midfielder bagging his first goal for the Blues with a blistering strike from the edge of the area in the ninth minute.

Stoke boss Mark Hughes’s decision to field a severely weakened team in the midst of the hectic festive fixture list was backfiring badly.

The visitors were three down by the 23rd minute when Pedro finished off Willian’s pass to put Chelsea on course for a fourth win in their last five league games.

Willian got on the scoresheet himself in the 73rd minute, stroking home a penalty awarded for a foul on the Brazilian, before wing-back Davide Zappacosta grabbed his first Premier League goal with two minutes remaining.

Carvalhal makes his mark
Carlos Carvalhal made an immediate impact at Swansea City as his new club climbed off the bottom of the table with a dramatic 2-1 win at Watford.

Carvalhal was the surprise choice to replaced the sacked Paul Clement just days after he’d been dismissed by second-tier Sheffield Wednesday.

The Portuguese coach’s first game got off to a bad start when Andre Carrillo nodded home in the 11th minute.

But Carvalhal was heard lambasting his players at half-time and they responded to his words with four minutes when left Ghana striker Jordan Ayew equalised.

In a remarkable finale, Luciano Narsingh won it for Swansea in the 90th minute with a close-range finish.

Swansea are two points from safety after their first win in five games.

Fraser side-footed Bournemouth ahead in the 33rd minute, only for Idrissa Gueye to equalise for Everton in the 57th minute.

Everton boss Sam Allardyce was unbeaten in seven games in all competitions since replacing Ronald Koeman, but Fraser ended that run with his 89th-minute strike.

Newcastle United are only one point above the bottom three after a dour 0-0 draw at home to Brighton and Hove Albion left them with just one win in 12 games.Huddersfield Town and Burnley shared a goalless draw at the John Smith’s Stadium.