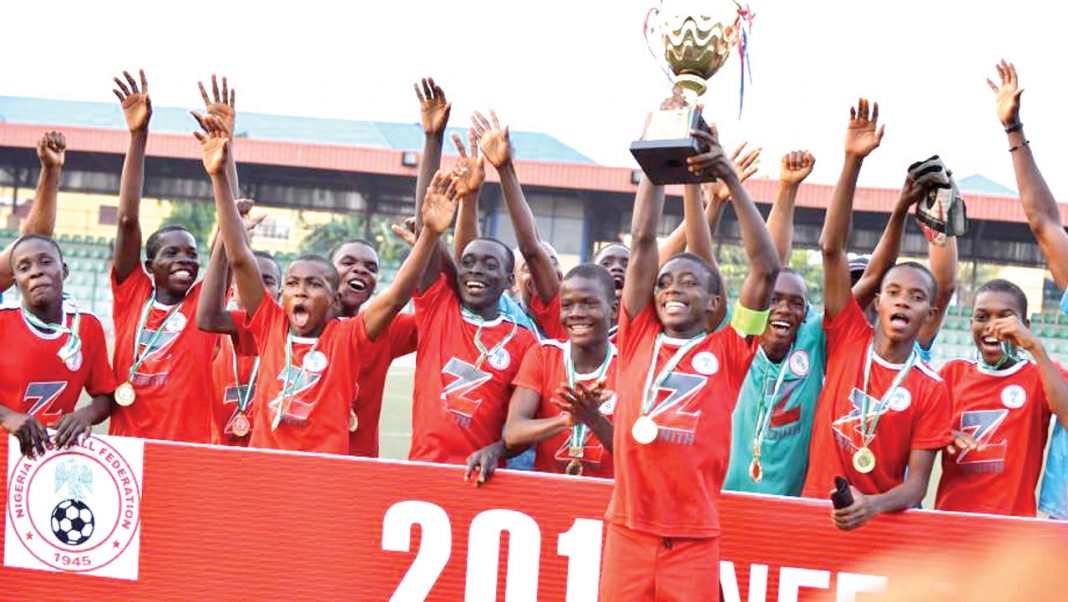 The victorious Southeast U-15 football team with the Future Eagles trophy after beating Northwest 5-2 at the Agege Stadium… yesterday.

The South East beat North West 5-2 to win the U-15 category of the Nigeria Football Federation (NFF) and Zenith Bank sponsored Future Eagles competition, which ended yesterday at the Agege Stadium, Lagos.

The Most Valuable player and highest goals scorer of the competition, Divine Nwachukwu scored a hat trick to help his team to victory. The other goals came from the boots of Franklin Eneh and Oluebube Oguduba. Saifulahi Ibrahim scored the two goals for North West.

Speaking after the final match, NFF’s First Vice President, Seyi Akinwumi, who is the coordinator of the championship, said, “We decided to name them the future Eagles because that is the aim of the competition

“We decided to name them the future Eagles because that is the aim of the competition.

“The kids have shown that they have potential and all we have to do is to monitor them by bringing them to camp. The only thing lacking is exposure and we can only do that by working with them alongside some great coaches.

“We are going to monitor their career and academics, anyone found wanting in any of the two will be drop and others will take their place.”

An elated Group Managing Director of Zenith Bank, Peter Amangbo congratulated the champions, while also reiterating the commitment of the bank to sports development in the country.

According to him, talents abound in Nigeria and the only way out is to look for them from the grassroots through different age grade competitions.

“We are not going to relent on what we are doing now by investing in grassroots football. It is obvious the future of Nigeria football is in the kids and I want to say a big congratulations to all the participating teams,” he added.

Earlier in Kano at the weekend, North Central defeated South West in the U-13 finals.