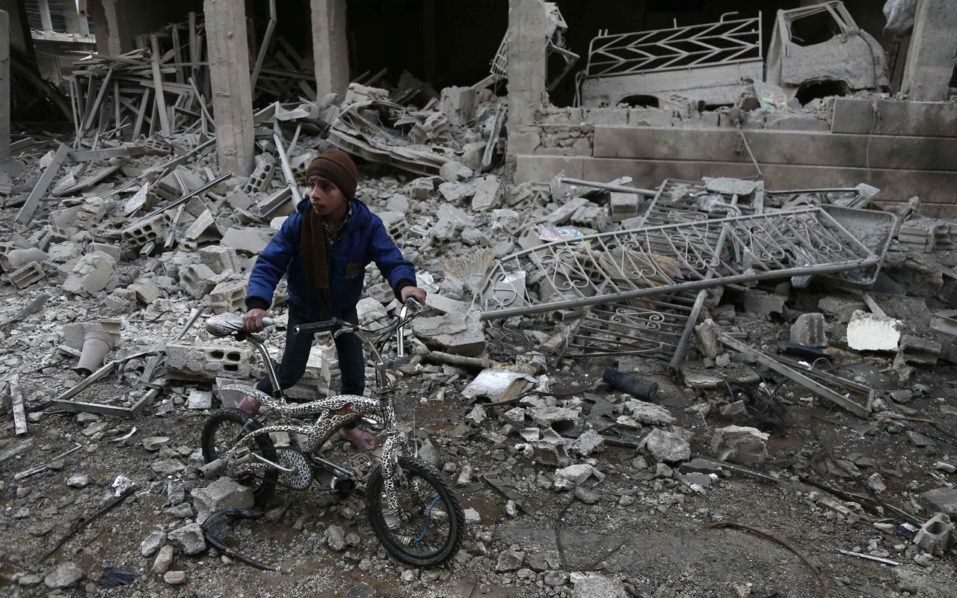 A Syrian boy walks with a bike amid the rubble following reported bombardment by Syrian and Russian forces in the rebel-held town of Hamouria, in the Eastern Ghouta, on January 6, 2018. Regime and Russian air strikes on a rebel-held enclave near the Syrian capital killed at least 17 civilians, a war monitor said. / AFP PHOTO / ABDULMONAM EASSA

Regime forces upped the pressure on two of the last rebel bastions in Syria, with air strikes in Idlib province and a move to break a siege near Damascus Monday.

Syrian and Russian aircraft pounded targets in the northwestern region of Idlib, pressing a week-old operation targeting the last province in the country to escape government control.

Raids Sunday left “at least 21 dead, including eight children and 11 members of the same family” west of the town of Sinjar in the southeast of the province, the Syrian Observatory for Human Rights said.

Russian-backed regime forces launched an operation on the edge of Idlib province in the last days of 2017 and have retaken villages every day since.

After the collapse of the Islamic State group in both Syria and Iraq late last year, President Bashar al-Assad’s regime is bent on restoring its grip over the country.

Idlib province, which borders Turkey, is almost entirely controlled by anti-government forces that are dominated by a jihadist outfit known as Hayat Tahrir al-Sham (HTS) consisting mostly of fighters from a former Al-Qaeda affiliate.

Among the other groups present in the province are thousands of jihadists from Central Asian states and members of the Muslim Uighur ethnic minority of China’s Xinjiang province.

An explosion on Sunday in the city of Idlib at a base for the group Ajnad al-Qawqaz, made up of fighters from the Caucasus that operates alongside HTS, left at least 34 dead, including 19 civilians, the Observatory said.

The initial death toll for the attack, the origins of which remain unclear, was 23 but the number went up on Monday when more bodies were found in the wreckage.

– Ghouta fighting –
Abdel Rahman said the casualty count could yet rise because more victims were believed to be buried under the rubble and many of the wounded were in critical condition.

“Rescue teams are still sifting through the wreckage,” he said.

It was not immediately clear whether the blast was caused by air strikes or was the result of the kind of internal clashes that sometimes break out between jihadist and rebel factions.

After shrinking to barely a sixth of the country at the height of the nearly seven-year-old conflict, the areas under government control now cover more than 50 percent of Syrian territory.

Another pocket where rebels are still holding out however is Eastern Ghouta, a semi-rural area east of the capital Damascus that is home to some 400,000 people.

Rebels led by the Jaish al-Islam group had in recent days surrounded the army’s only military base in the area but the state news agency SANA said Monday the siege had been broken.

“Units from the Syrian Arab Army have brought an end to the encirclement of the Armoured Vehicles Base in Harasta,” it said, adding that operations were ongoing to fully secure the base.

According to the Observatory, the fighting in Harasta since the base was surrounded in late December left 72 regime fighters and 87 rebels dead.

The shelling and bombardment of besieged Ghouta, where the humanitarian conditions have sharply deteriorated in recent months, has also claimed a heavy toll on civilians.

The latest casualties came on Monday when air strikes killed a child and two other civilians in Madira, a village in Eastern Ghouta, the Observatory said.

More than 340,000 people have been killed and millions have been driven from their homes since Syria’s conflict erupted with anti-government protests in 2011.