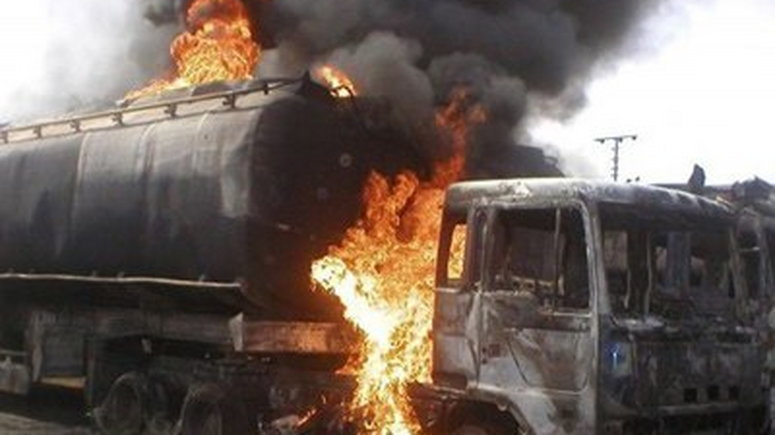 No fewer than seven suspected smugglers of petroleum products have been reported burnt to death in a petroleum tanker fire outbreak in Mubi Local Government Area of Adamawa.

Mubi is a commercial nerve of Adamawa and it is bordering with the Republic of Cameroon.

An eyes witness, Alhaji Mansur Bala, told the News Agency of Nigeria that the incident occurred in the early hours of Wednesday.

Bala said that the fire brokeout when the deceased were transferring petroleum products from a tanker to over 1,000 plastic jerricans at a filling station.

Another eyewitness, Malam Iliya Haruna, told NAN that he counted seven death bodies that were burnt beyond recognition.

Haruna said that among the death bodies were two paternal brothers who were well known in petroleum business in Mubi.

Sulaiman however said that only three people were killed in the incident, while two sustained various degrees of injuries.

“The petroleum tanker fire incident occurred in the early hours of Wednesday at about 1.30 a. m.

“So far, three people lost their lives and two sustained injuries from fire burns and they are receiving medical treatment at the Mubi General Hospital,” Sulaiman said.

He said property worth millions of naira were also destroyed by the fire.

The executive secretary, therefore, advised petroleum products dealers in the state to as matter of safety avoid operation during odd hours.