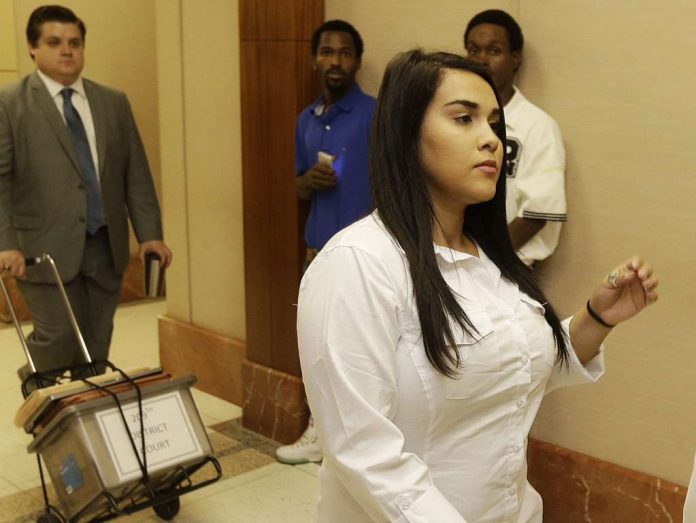 Houston middle school teacher who got pregnant by her 13-year-old student has been sentenced to 10 years in prison.
Alexandria Vera was hoping for probation, according to The AP, but State District Judge Michael McSpadden is using his decision to make an example out of the the teacher, claiming he’s seen too many similar cases like this.
“We want our educators to teach our students,” McSpadden said in court, MySanAntonio.com reported. “We want them to keep their hands off the students.”
The 24-year-old taught English in north Houston’s Stovall Middle School, where she met the student in 2015. One day in 2016, the male student skipped class and Instagram messaged Vera, asking her for her number to hang out just the two of them, KPRC Houston reported.
Vera, who has a 4-year-old daughter from a separate relationship, told investigators she drove to his house the next day — when his parents weren’t home — and had sex with him for the first time.
They continued the illicit relationship throughout the school year — having sex “on almost a daily basis” and students noticing the two flirting in between classes, according to court documents.
“He like grabbed her butt and everyone saw it,” one student told ABC. “And then they were talking about it.”
“That kid was always over (Vera’s house) and she always told (neighbors) it was her brother,” a neighbor told WFAA-ABC when news of the affair broke.
At the fall open house, Vera met his parents and was introduced as his girlfriend. Later his parents became increasingly welcoming to Vera, who that month announced she was pregnant with the teen’s child.
Bizarrely, his parents had no problem with his relationship with Vera, who claimed they were “very supportive and excited” when they found out about the pregnancy. Vera told an investigator that she ended up getting an abortion after a child welfare investigator got in contact with her.
Eventually when the former teacher turned herself in, she was booked on charges of continuous sexual abuse of a child and released on $100,000 bail.