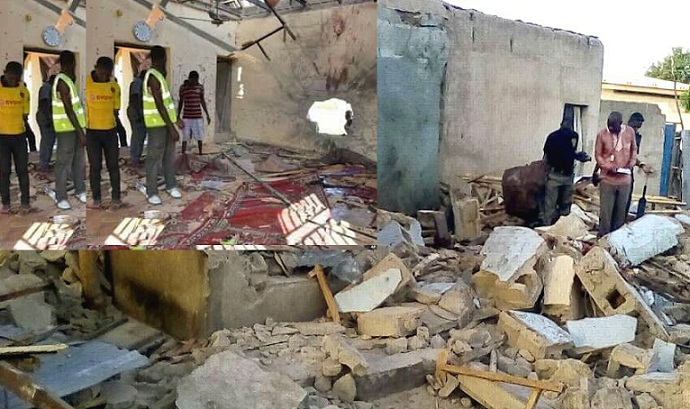 The News Agency of Nigeria reports that the incident occurred at about 5: 00 am, when a teenage male suicide bomber detonated an Improvised Explosive Device, IED, strapped to his body in a mosque at Yobe area of Gamboru.

Mr Nicholas, a major general, said that five persons were killed in the attack as against 11 earlier reported.

He added that the troops had also killed a suicide bomber at Rann, headquarters of Kala-Balge local government area.

“Yes, but only five killed and another suicide bomber neutralized in Rann,” he said.
However, Lawan Abba, a resident of Gamboru, told NAN that 10 persons were killed and six others sustained injuries in the attack.

Mr Abba disclosed that the suicide bomber sneaked into a crowded mosque while people gathered to observe Morning Prayer and detonated the explosive.

He revealed that the teenage suicide bomber hailed from Gamboru town, adding that the father to the assailant was among the 10 persons, who lost their lives in the attack.

“The suicide bomber hailed from Gamboru town, he disowned his parents and joined the insurgents in the bush.

“He entered the mosque blew up himself into pieces and killed 10 persons including his biological father,” he said.

Mr Abba added that the wounded persons were referred to the clinic in the Internally Displaced Persons, IDPs camp in the area of Gamboru, for treatment.