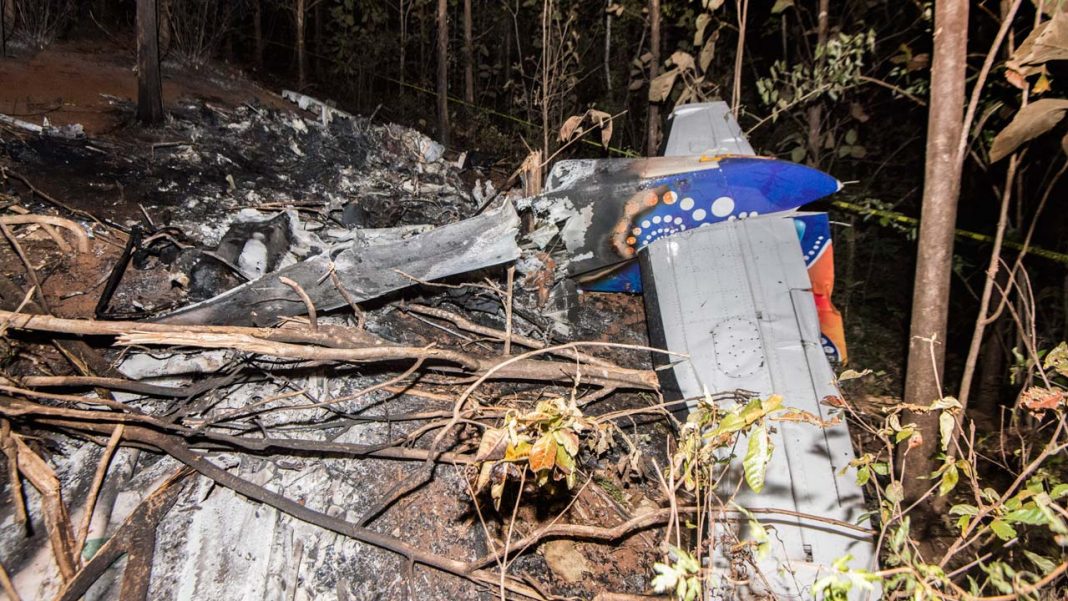 The tail of the burned fuselage of a small plane that crashed is seen in Guanacaste, Corozalito, Costa Rica on December 31, 2017. Ten Americans flying from a vacation hotspot on Costa Rica’s tropical Pacific coast died when the small plane they had just boarded crashed and burst into flames shortly after take-off, officials in the country said.Ezequiel BECERRA / AFP

Ten Americans flying from a vacation hotspot on Costa Rica’s tropical Pacific coast died Sunday when the small plane they had just boarded crashed and burst into flames shortly after take-off, officials in the country said.

A list of the passengers given by local media showed five shared the same last name, suggesting they were related.

“The government of Costa Rica profoundly regrets the deaths of 10 US passengers and two Costa Rican pilots in the air accident,” which occurred in the country’s northwestern Guanacaste region, Costa Rican President Luis Guillermo Solis said in a statement posted to social media.

A US State Department official said: “We confirm the deaths of multiple US citizens in an airplane crash in Costa Rica,” adding that assistance was being provided to the affected Americans.

– Cause unknown –
Costa Rican officials said the plane that came down belonged to Nature Air, a domestic airline that services routes across the country and also provides aircraft for charter.

Guanacaste is a popular vacation destination, especially this time of year, when its pristine beaches and jungle provide a respite for tourists fleeing the northern hemisphere’s winter.

Americans are by far the biggest group of tourists visiting Costa Rica.

The plane that crashed was a single-engine turboprop Cessna 208 Caravan. Its flaming debris was scattered across a wooded mountain close to the beach town of Punta Islita.

Images posted by the country’s public security ministry showed blackened wreckage, some in flames, with only part of the tail recognizable.

The cause of the crash was unknown.

Solis said in his statement that his government “gives its commitment to do everything necessary to work with the relatives of the victims to give them what they need in this difficult moment.”

He said emergency services launched into action when the alarm over the crash was given at 12:13 pm (1813 GMT).

The process of recovering the bodies continued into the night, with investigations into the causes of the accident set to begin Monday.

No ages were given.

The newspaper reported the plane had taken off from the capital San Jose at 11:37 am for the small sealed airstrip in Punta Islita, where the tourists boarded.

The passengers had paid $2,300 for their flight, it said.

The two pilots were identified as Juan Manuel Retana Chinchilla and Emma Ramos.

“You will remain in our hearts, dear Juan Manuel Retana,” she wrote.

This time of year is particularly busy in Costa Rica’s coastal resort areas as tourists and locals alike spend end-of-year holidays in the sun.