Tottenham up to second as Kane treble crushes Stoke

1 of 10
Tottenham players celebrates with Tottenham Hotspur’s English striker Harry Kane after he scored his third goal to complete his hattrick during the English Premier League football match between Tottenham Hotspur and Stoke City at White Hart Lane in London, on February 26, 2017.
OLLY GREENWOOD / AFP 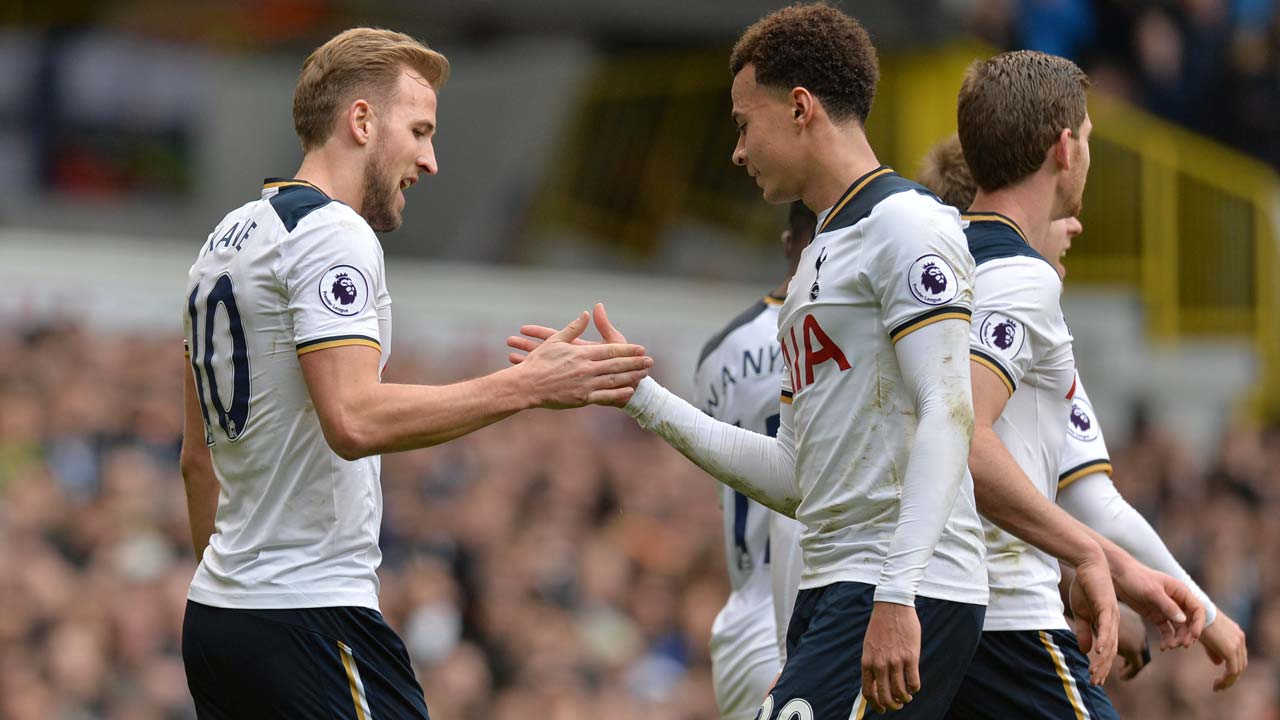 Harry Kane hit a first-half hat-trick as Tottenham stormed up to second in the Premier League with a 4-0 home demolition of Stoke on Sunday.

Kane’s treble took his tally to 17 league goals this season, while his first of the day at White Hart Lane was his 100th club goal.

The England forward, 23, who also scored three against Fulham in the FA Cup a week ago, capped an outstanding all-round display by setting up Dele Alli for the fourth.

That helped Alli to draw a line under his dismissal against Gent that contributed to Spurs’ Europa League exit on Thursday.

Tottenham’s victory took them above Manchester City and closed the gap on runaway leaders Chelsea to 10 points.

The damaging failure to beat Gent marked the latest disappointment for Spurs in a frustrating month that also saw their title challenge fade significantly.

The challenge confronting Mauricio Pochettino’s side was to produce a performance and result that would help put the midweek embarrassment behind them.

It quickly became clear this game would provide the ideal platform for Spurs and Alli to redeem themselves after a testing 72 hours of soul-searching.

Within three minutes, Christian Eriksen had flashed a shot across the face of goal, provoking an angry reaction from Pochettino, who was infuriated at the Dane’s failure to pick out a better-placed team-mate.

The manager need not have worried. Stoke could barely manage to rouse themselves and after Joe Allen hit the side netting for the visitors, Kane produced the 14th-minute opening goal that put the home side firmly in control.

– Technique –
The chance came when Stoke’s Ryan Shawcross failed to clear Eriksen’s threaded pass, but Kane’s finish was ruthless, with the striker latching onto the loose ball and producing a first-time shot that flew across keeper Lee Grant.

The technique Kane demonstrated in claiming his second in the 32nd minute was even better.

Eriksen’s right-wing corner was played out to Kane, who had positioned himself on the edge of the area, where he hit the bouncing ball on the full, left-footed, inside Grant’s right-hand post.

Prior to that, Stoke threatened when Peter Crouch slid in to meet Erik Pieters’ low cross, only to be denied by the boot of Spurs Keeper Hugo Lloris, while Charlie Adam collected a booking for a foul on Alli.

But their response quickly faded and Tottenham’s third came when Adam again fouled Alli to concede a free-kick 30 yards out.

Eriksen rolled the ball to Kane, whose low shot deflected off the defensive wall, wrong-footing Grant and securing the striker’s hat-trick.

Stoke boss Mark Hughes was clearly angered by his side’s display but worse was to come in first-half stoppage time when Kane out-paced Bruno Martins-Indi on the right and burst into the box before squaring for Alli, who slid in for the fourth.

Injury to Toby Alderweireld at the start of the second half provided Spurs’ first setback of the game, while the sight of Kane colliding with a post was also a momentary cause for concern.

That aside, the only frustration for Spurs and Kane was that they failed to add to their first-half tally, with Grant producing an excellent save to deny the striker his fourth goal.

Djokovic pulls out of Paris Masters