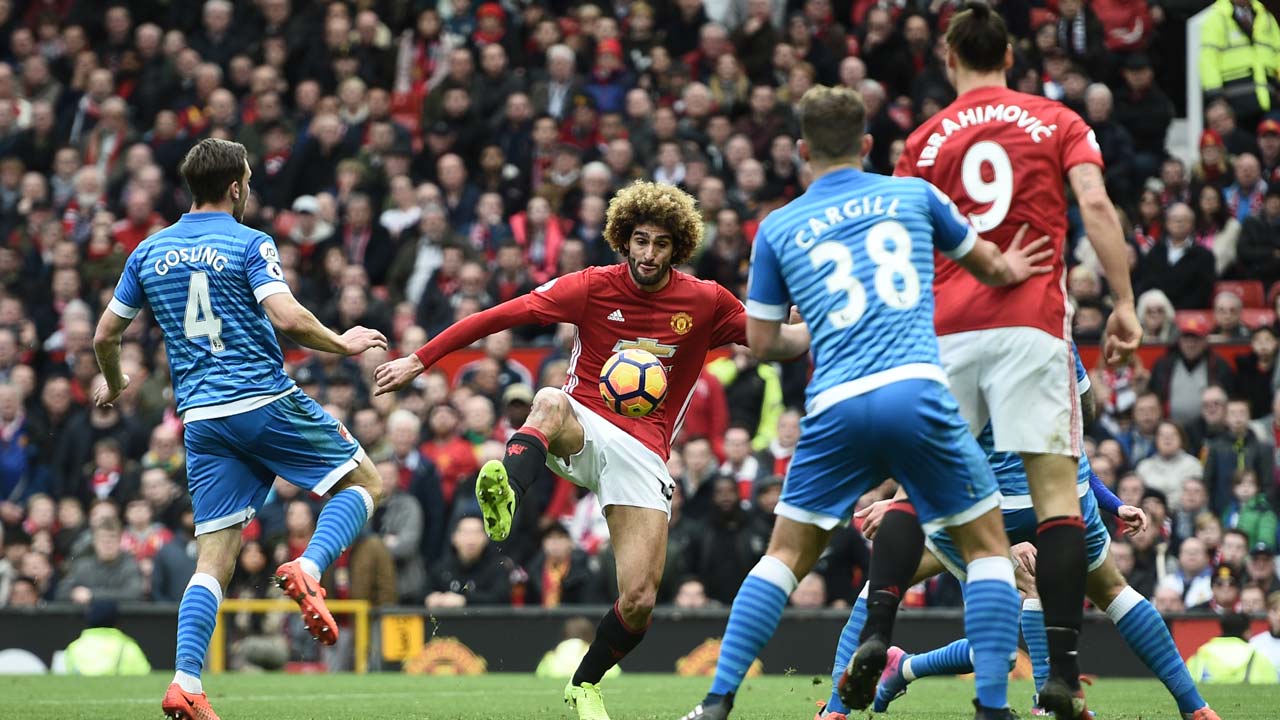 Zlatan Ibrahimovic was at the centre of controversy as Manchester United were held 1-1 by 10-man Bournemouth in an extraordinary Premier League match at Old Trafford on Saturday.

Ibrahimovic, United’s 26-goal top scorer, was fortunate not to be sent off before seeing a penalty saved as Jose Mourinho’s side missed the opportunity to move into the Champions League places.

Marcos Rojo gave the home side the lead with his first league goal for the club, before former United forward Joshua King equalised from the penalty spot five minutes from the end of the first half.

But the match centred on a series of incidents in quick succession at the end of the half, in which both Ibrahimovic and Tyrone Mings were lucky to escape red cards.

Bournemouth defender Mings appeared to stamp on the head of the former Paris Saint-Germain forward.

Ibrahimovic, already on a yellow card, then elbowed the centre-back in the face seconds later, but received only a telling off from referee Kevin Friend.

Both Ibrahimovic and Mings are likely to face retrospective disciplinary action from the Football Association.

In the ensuing melee, Bournemouth midfielder Andrew Surman shoved Ibrahimovic and was shown a second yellow card. But Surman was only shown a red card after United left-back Luke Shaw reminded Friend he had already been booked.

Artur Boruc, the visitors’ 37-year-old goalkeeper, had a fine game, making a series of saves against a United side who dominated. His best moment was keeping out Ibrahimovic’s penalty with just under 20 minutes to go, getting down low to his right to push the ball aside.

The point means United remain in sixth place, where they have remained since early November, while Bournemouth ended a run of four successive league defeats.

Bournemouth looked as if they would be overwhelmed in the first half-hour of a match that reached boiling point as the interval approached.

The visitors’ resistance was broken midway through the half as Rojo deflected in Antonio Valencia’s cross-shot to score his first league goal for United.

But Bournemouth, who had spurned one early chance as Benik Afobe slipped when clear, drew level five minutes before half-time. King struck a penalty into David de Gea’s top right-hand corner after Phil Jones had brought down Marc Pugh.

Boruc then made further fine reaction saves to deny Rooney and Ibrahimovic, before the match’s two key flashpoints occurred in the final moments of the half.

Ibrahimovic’s battle with Mings had become increasingly heated and the former Sweden striker was fuming after his opponent appeared to stamp on the side of his head amid a scramble.

Ibrahimovic responded seconds later by elbowing Mings in the face. Having already been booked, the striker escaped with just a lecture from Friend. Bouremouth’s sense of injustice was then heightened as Surman, booked for an earlier challenge on Shaw, was dismissed.

Jason Tindall, the Bournemouth assistant manager, first ranted at the assistant referee, then marched onto the field at half-time to usher his players away from Friend.

Rooney saw a clever shot on the turn deflected just over and Gosling was relieved to see a header back towards his own goal drop just wide. Boruc was then alert once more, flying to his left to tip aside Pogba’s 25-yard curler as it headed towards the top corner.

Mourinho made a triple substitution with 20 minutes to go in an attempt to force the win, sending on Jesse Lingard, Marouane Fellaini and Marcus Rashford for Shaw, Michael Carrick and Rooney.

Within seconds, United were awarded a penalty as Adam Smith handled Pogba’s header back across goal. Ibrahimovic stepped up, but Boruc saved superbly.