1 of 10
(LtoR) Malta’s Prime minister Joseph Muscat, European Council President Donald Tusk, France’s President Francois Hollande and Italy’s Prime Minister Paolo Gentiloni pose for pictures ahead of a special summit of EU leaders to mark the 60th anniversary of the bloc’s founding Treaty of Rome, on March 25, 2017 at Rome’s Piazza del Campidoglio (Capitoline Hill). Meeting in the same Renaissance-era palace where six founding countries signed the Treaty of Rome on March 25, 1957, the 27 leaders minus Britain will endorse a declaration of intent for the next decade. Andreas SOLARO / AFP 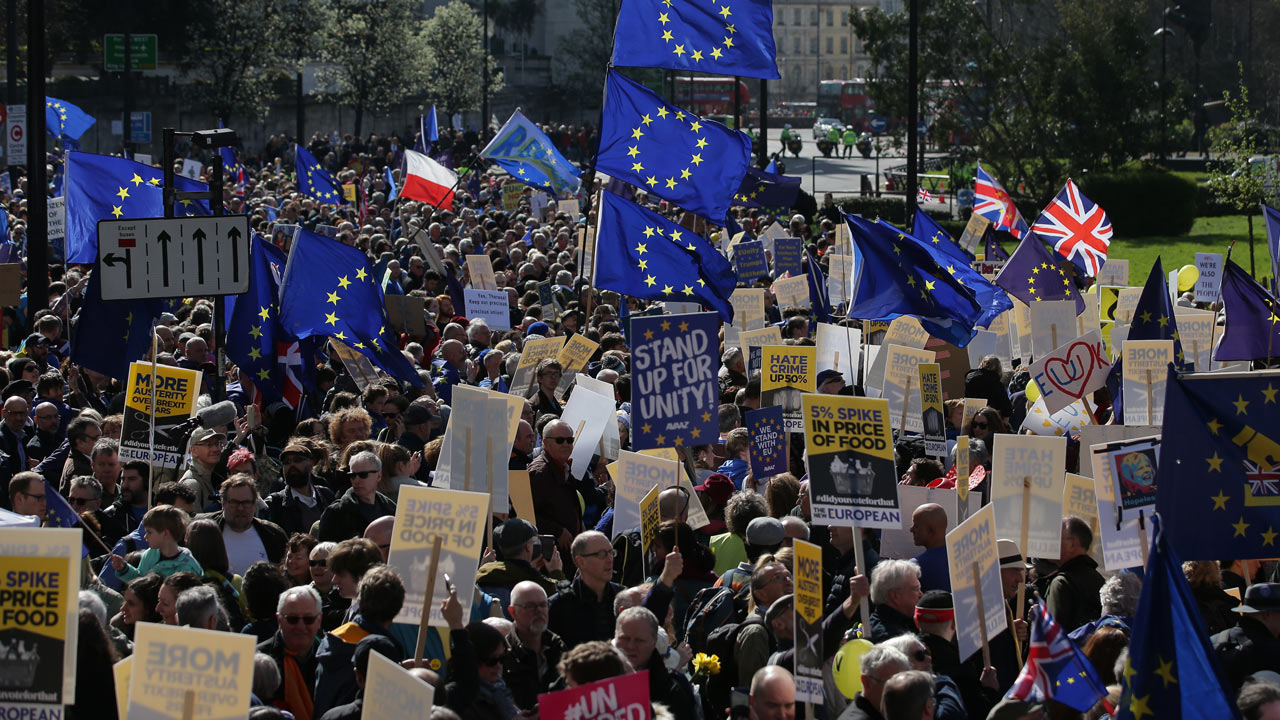 Demonstrators wave Union (L) and EU flags as they gather on Pall Mall to participate in an anti Brexit, pro-European Union (EU) march in London on March 25, 2017, ahead of the British government’s planned triggering of Article 50 next week. Britain will launch the process of leaving the European Union on March 29, setting a historic and uncharted course to become the first country to withdraw from the bloc by March 2019. Daniel LEAL-OLIVAS / AFP 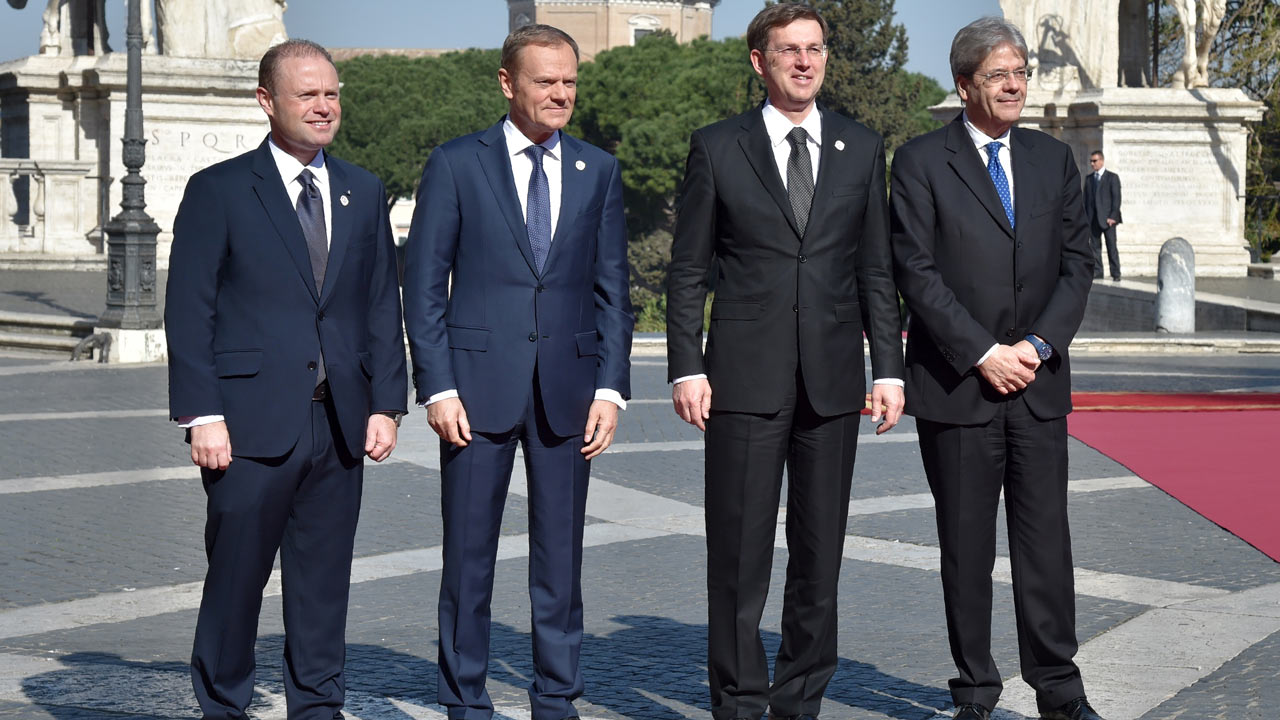 (LtoR) Malta’s Prime minister Joseph Muscat, European Council President Donald Tusk, Slovenia’s Prime Minister Miro Cerar and Italy’s Prime Minister Paolo Gentiloni pose for pictures ahead of a special summit of EU leaders to mark the 60th anniversary of the bloc’s founding Treaty of Rome, on March 25, 2017 at Rome’s Piazza del Campidoglio (Capitoline Hill). Meeting in the same Renaissance-era palace where six founding countries signed the Treaty of Rome on March 25, 1957, the 27 leaders minus Britain will endorse a declaration of intent for the next decade. Andreas SOLARO / AFP

European Union leaders renewed their vows at a special summit in Rome on Saturday, celebrating the bloc’s 60th anniversary with a commitment to a common future without Britain.

Meeting without British Prime Minister Theresa May, the other 27 member countries signed a declaration of unity on the Capitoline Hill where six founding states signed the Treaty of Rome on March 25, 1957.

With the EU facing crises including migration, a moribund economy, terrorism and populism, as well as Brexit, EU President Donald Tusk called for leadership to shore up the bloc.

“Prove today that you are the leaders of Europe, that you can care for this great legacy we inherited from the heroes of European integration 60 years ago,” Tusk said in a speech.

The Rome Declaration that the leaders signed proclaims that “Europe is our common future”, and sets out the path for the next decade in a rapidly changing world.

“It is it a bit of a tighter squeeze in the room today” than when the original six states signed up, joked Italian Prime Minister Paolo Gentiloni after welcoming the leaders to the Renaissance-era Palazzo dei Conservatori for a ceremony long on pomp and short on real politics.

“We have had 60 years of peace in Europe and we owe it to the courage of the founding fathers,” Gentiloni said, acknowledging that a string of crises had combined to bring the process of European integration to a standstill.

“When the iron curtain fell in 1989 we thought their dream had been realised but (recent crises) have shown us that history is anything but finished.

“We have to start again and we have the strength to do that.”

“Daunting as they are, the challenges we face today are in no way comparable to those faced by the founding fathers,” he said, recalling how the new Europe was built from the ashes of World War II.

“We are standing on the shoulders of giants,” Juncker said, voicing confidence that the EU would still be around to celebrate its 100th birthday.

The leaders had the words of Pope Francis ringing in their ears, after the pontiff warned on the eve of the summit that the crisis-ridden bloc “risks dying” without a new vision.

The White House meanwhile congratulated the EU overnight on its 60th birthday, in a notable shift in tone for President Donald Trump’s administration, whose deep scepticism about the bloc has alarmed Brussels.

“Our two continents share the same values and, above all, the same commitment to promote peace and prosperity through freedom, democracy, and the rule of law,” the White House said in a statement.

Security was tight with snipers on rooftops, drones in the skies and 3,000 police officers on the streets following an attack this week in London claimed by the Islamic State (IS) group.

May’s absence, four days before she launches the two-year Brexit process, and a row over the wording of the Rome declaration have underscored the challenges the EU faces.

– Protests planned –
Polish Prime Minister Beata Szydlo only agreed to sign the declaration at the last minute, after bitterly opposing a reference to a “multi-speed” Europe favoured by powerhouse states France and Germany.

Poland, central Europe’s largest economy, is concerned that as one of nine of the EU’s current 28 members outside the eurozone, it could be left behind should countries sharing the single currency push ahead with integration.

The aim of the summit was to channel the spirit of the Treaty of Rome that Belgium, France, Italy, Luxembourg, The Netherlands and West Germany signed six decades ago to create the European Economic Community (EEC).

The treaty was signed in the Horatii and Curiatii hall of the Palazzo dei Conservatori, one of the Renaissance palaces that line the Michelangelo-designed Capitoline Square, and the political and religious heart of the Roman Empire in ancient times.

Police in the Eternal City were on alert not only for lone wolf attackers in the wake of the British parliament attack on Wednesday, but also violent anti-Europe demonstrators.

Around 30,000 protesters are expected to take part in four separate marches — both pro- and anti-Europe — throughout the day.