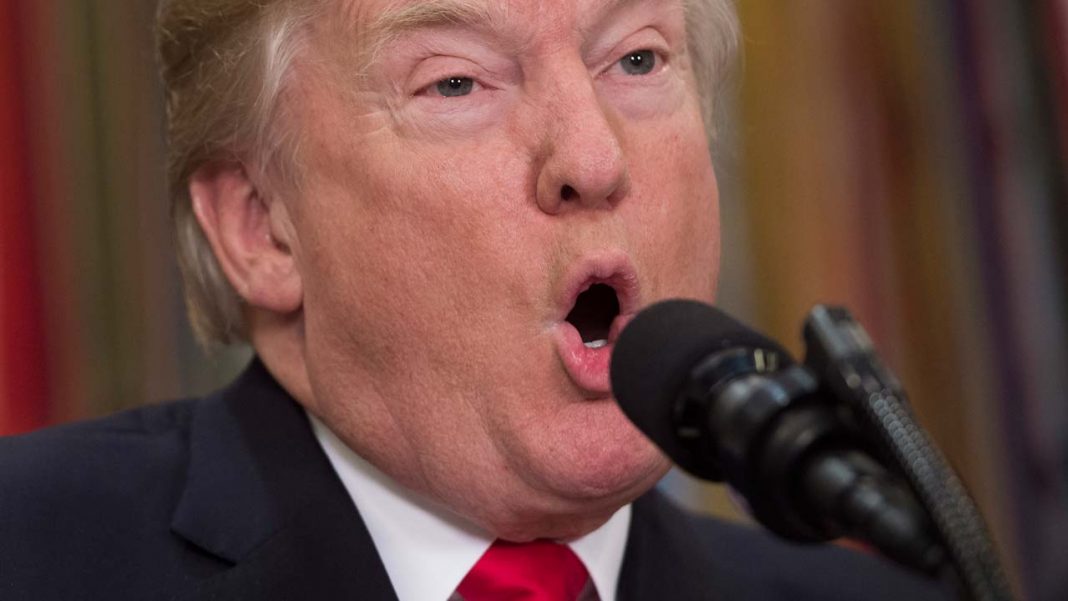 (FILES) This file photo taken on December 12, 2017 shows US President Donald Trump speaking prior to signing H.R. 2810, National Defense Authorization Act for Fiscal Year 2018, during a signing ceremony in the Roosevelt Room at the White House in Washington, DC. US President Donald Trump grudgingly agreed not to reimpose nuclear sanctions on Iran on January 12, 2018, but officials warned that it would be the last time he issues such a waiver. Instead, a senior White House official said, Trump wants Washington’s European allies to use the 60-day period before sanctions relief again comes up for renewal to agree on tougher measures. SAUL LOEB / AFP

US President Donald Trump announced Friday he would not reimpose nuclear sanctions on Iran, keeping a landmark 2015 deal alive… for now.

The Republican leader grudgingly agreed to sign sanctions waivers, ensuring Washington will live up to its commitments for another 120 days, but he cautioned it would be “for the last time.”

During that four-month period, he wants Congress and America’s main European allies to draw up a new deal — without negotiating with Tehran — to replace the “disastrous flaws” in the current agreement.

“Despite my strong inclination, I have not yet withdrawn the United States from the Iran nuclear deal,” Trump said in a statement.

“Instead, I have outlined two possible paths forward: either fix the deal’s disastrous flaws, or the United States will withdraw.”

The new deal — which Trump envisions as being outlined in US law and involving Britain, France and Germany — would impose tougher controls on Iran if sanctions relief is to continue.

In particular, it will not begin to expire after 10 years as parts of the existing deal do, but instead would impose permanent restrictions on not just Iran’s nuclear plants but also its missile program.

“These provisions must have no expiration date. My policy is to deny Iran all paths to a nuclear weapon — not just for 10 years, but forever,” Trump said.

“If Iran does not comply with any of these provisions, American nuclear sanctions would automatically resume.”

Trump is also urging Congress to reform US law so the president is no longer required to declare every 90 days whether he thinks Iran is in compliance, or to renew sanctions waivers every 120 or 180 days.

The 2015 deal, he said, “is not renegotiable. Rather than repeating tired rhetoric, US must bring itself into full compliance — just like Iran.”

Trump’s decision was announced alongside another package of new sanctions — punishing not Iran’s nuclear program, but its alleged abuse of human rights in a crackdown on recent street protests.

The most prominent new name on the Treasury sanctions blacklist, which forbids Americans from doing business with the targets, is the head of Iran’s judiciary, Sadegh Amoli Larijani.

The US Treasury said Larijani, the brother of Iran’s parliamentary speaker and former nuclear negotiator Ali Larijani, is to blame for the torture and degrading treatment of prisoners.

Washington policy hawks hailed Trump’s decision, which they said would concentrate minds in Europe, where leaders have urged the US president not to sabotage a deal they see as a landmark diplomatic success.

“So Trump now has issued explicit May deadline to Congress and Europeans: Fix Iran nuke deal or no more sanctions waivers,” wrote Mark Dubowitz, head of the Foundation for Defense of Democracies.

“Is he bluffing? I don’t think so. Busy four months ahead.”

But supporters of the existing deal between Iran and six world powers, including the former officials in Barack Obama’s administration who negotiated it, denounced Trump’s plan.

Diplomacy Works, a pressure group set up by former secretary of state John Kerry to defend the deal, was scathing.

“Today, we learned that the president’s plan includes bullying our allies into fundamentally altering the terms of a deal that they know is working for our mutual security and have publicly stated they have no interest in amending,” it said.

The other signatories to the deal — Britain, China, France, Germany and Russia — and the European Union, which oversaw the talks, were watching carefully.

The British and German foreign ministries said they had taken note of the decision and would confer with France before deciding on a course of action.

“The UK has a clear position on the Iran nuclear deal: we regard it as a crucial agreement that makes the world a safer place by neutralizing the threat of a nuclear-armed Iran,” the British Foreign Office said.

The EU said it would hold internal consultations and was “committed to the continued full and effective implementation” of the deal.

America’s allies see the accord as the best way to thwart Iran’s nuclear ambitions and a victory for multilateral diplomacy. Tehran categorically denies it is seeking to develop atomic weapons.

But Trump argues that Obama gave away too much to Iran in sanctions relief, without forcing the Islamic republic to end its ballistic missile program and support for militant groups.

While there may be some relief that Trump has yet to torpedo the hard-won accord, there were clear signs of frustration from European capitals in the runup to the decision.

French President Emmanuel Macron called Trump on Thursday and stressed France’s determination to see “the strict application of the deal and the importance of all the signatories to respect it.”

And Russia spoke out strongly in favor of the accord, calling it “the result of a consensus among many parties.”

UN inspectors have certified Iran’s compliance with the deal nine times, most recently in November.