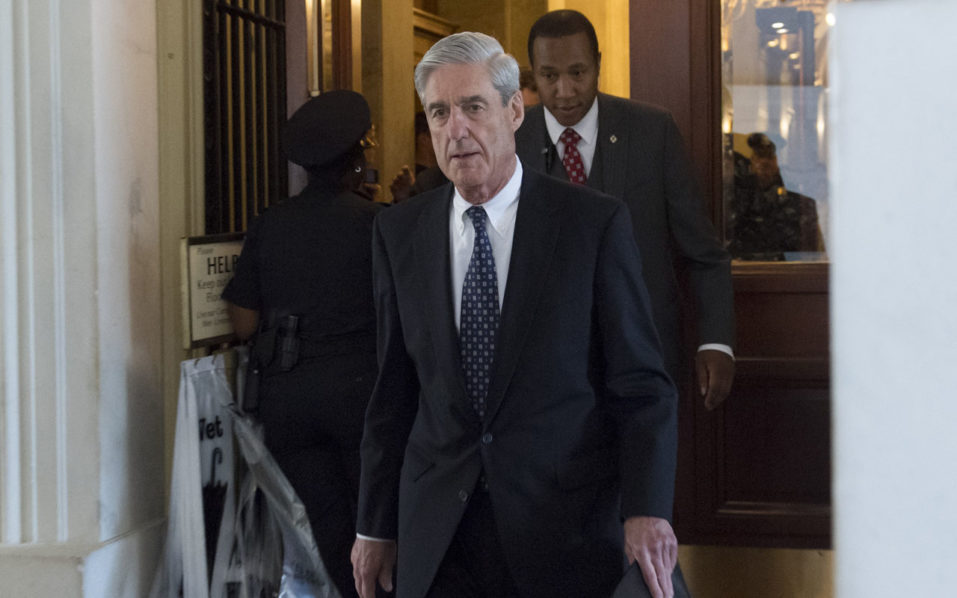 (FILES) This file photo taken on June 21, 2017 shows Former FBI Director Robert Mueller, special counsel on the Russian investigation, following a meeting with members of the US Senate Judiciary Committee at the US Capitol in Washington, DC on June 21, 2017. A lawyer for Donald Trump’s transition team has alleged special counsel Robert Mueller unlawfully received tens of thousands of emails, in the latest attack on the credibility of the probe into Russian meddling in the US election. With the ex-FBI director’s investigation making inroads into the president’s inner circle in recent weeks, Republicans have cast doubt on its impartiality and pressed for a new independent prosecutor to investigate anti-Trump bias./ AFP PHOTO / SAUL LOEB

President Donald Trump insisted Sunday he has no plans to fire special counsel Mueller, despite his team’s recent attacks on the credibility of the probe into Russian meddling in the US election.

With the ex-FBI director’s investigation making inroads into the president’s inner circle in recent weeks, Republicans have sought to cast doubt on its impartiality and pressed for a new independent prosecutor to investigate anti-Trump bias.

This in turn has led to speculation that the administration could be laying the groundwork for firing Mueller.

But Trump shot down those rumors. Asked whether he was going to fire Mueller, the president told reporters: “No, I’m not.”

The GSA is the government agency that supports presidential transitions — the interim period after a new president is elected but before he takes office.

Langhofer wrote that Mueller’s office “received from the GSA tens of thousands of emails, including a very significant volume of privileged material,” according to a copy of the letter published by Politico.

The letter added that a warrant should have been obtained for such materials, and said it violated the Presidential Transition Act.

Trump said “my people are very upset about it,” calling the development “quite sad.”

But Mueller’s spokesman Peter Carr told CNN that emails were obtained for the probe after “we have secured either the account owner’s consent or appropriate criminal process.”

– Probe tightens –
Mueller was appointed after Trump abruptly fired then-FBI director James Comey, who was leading an agency probe into the Russia affair.

The president’s Democratic foes have sought to characterize the allegations of illegality as an attempt to stymie the probe, which has already led to charges against Trump’s former national security advisor Michael Flynn and three other people linked to the presidential campaign.

“If removed or meaningfully tampered with, there must be mass, popular, peaceful support of both. The American people must be seen and heard – they will ultimately be determinative.”

Democratic Congressman Eric Swalwell said: “This is another attempt to discredit Mueller as his #TrumpRussia probe tightens.”

Republicans asked the US Justice Department on Wednesday to name a new independent prosecutor to probe alleged bias in the FBI.

The special counsel’s critics have seized upon the case of Peter Strzok, a senior FBI agent whom Mueller removed from his team for sending text messages critical of Trump.

In addition to whether Trump’s campaign team colluded with Russia to help him win last year’s election, the special counsel is also looking at possible obstruction of justice linked to Trump’s firing of Comey.

Trump did so in May and later acknowledged he had the Russia probe in mind when he sacked him.

Comey, for his part, wrote a memo alleging Trump had asked him to drop his investigation into Flynn, an act which some say could constitute obstruction of justice and thus grounds for seeking Trump’s impeachment.

But the Justice Department’s number two, Rod Rosenstein, insisted this week that the investigation was impartial and free from any political influence.

Trump has repeatedly denied claims of “collusion” with Russia, and denounced the “witch hunt” against him.