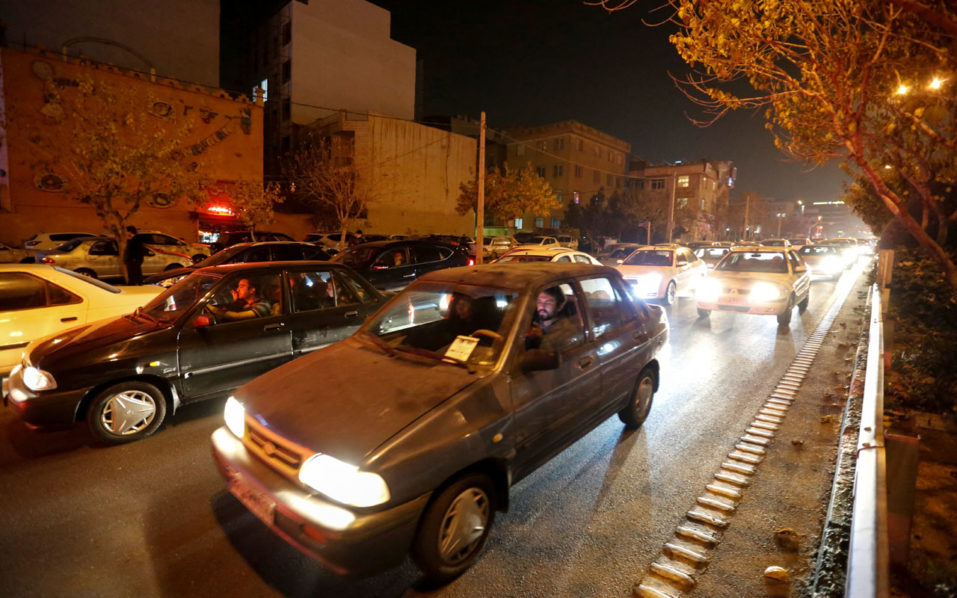 People drive their car overnight on December 21, 2017, as people wait in he streets after an earthquake was felt in the Iranian capital.
The quake measuring 5.2 magnitude struck shortly before 11:30 pm (2000 GMT), according to the seismological centre of the University of Tehran. The epicentre of the tremor was located about 40 kilometres (25 miles) west of the capital. / AFP PHOTO / ATTA KENARE

An elderly woman and a young girl died and nearly 100 people were injured as a 5.2 magnitude earthquake sparked panic in the Iranian capital and neighbouring areas, officials said Thursday.

The epicentre of the quake, which struck shortly before 11:30 pm (2000 GMT) on Wednesday, was just 40 kilometres (25 miles) west of the capital, according to the seismological centre of the University of Tehran.

“A 70-year-old woman died after suffering a heart attack and a 10–year-old died of elevated stress,” the head of Iran’s hospital emergency services, Mojtaba Khaledi, told the ISNA news agency.

Khaledi said around 50 of those were admitted to hospital.

The quake caused no major damage but tens of thousands of people spent the night outside for fear of aftershocks.

Many of them did so in their vehicles with the engines switched on for warmth in the wintry conditions, exacerbating the thick smog that has enveloped the capital all week.

Petrol purchases in the six hours after the quake reached 10 million litres (2.64 million gallons), more than double the average full day sales even though it was in the middle of the night, the national fuel distribution company said.

Average airborne concentration of the finest and most hazardous particles (PM2.5) rose to 170 microgrammes per cubic metre, with peaks of 194 microgrammes in some neighbourhoods, Tehran municipality said.

That is some seven times higher than the World Health Organization recommended maximum of 25 microgrammes per m3 over a 24-hour period.

Iran sits atop several fault lines, and Wednesday’s quake is the latest in a series to have hit the country in recent weeks.

A 6.2-magnitude earthquake struck the southeastern province of Kerman on December 13, leaving at least 18 people injured.

On November 12, the western province of Kermanshah was hit by a 7.3-magnitude quake that killed 620 people.

Iran’s deadliest quake in recent years was a 6.6-magnitude tremor that struck the southeast in 2003, decimating the ancient mud-brick city of Bam and killing at least 31,000 people.